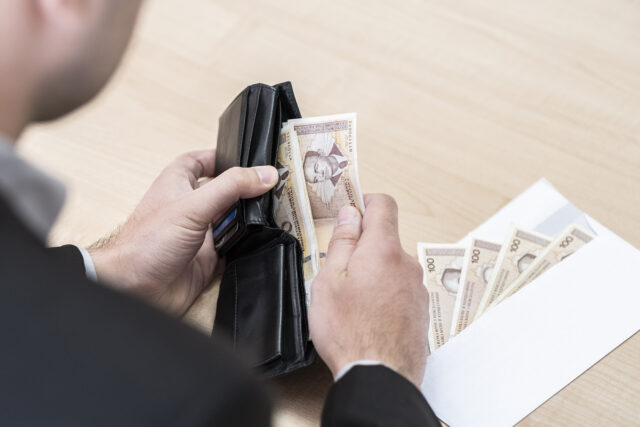 Bariša Čolak and Jakov Galić, members of the Parliamentary Assembly of Bosnia and Herzegovina (PABiH), received severance payments for retirement during the coronavirus pandemic, but immediately resumed full-time employment.

Although during this time of crisis and uncertainty, MP Damir Arnaut made three proposals to the State Parliament to lower the salaries of officials in order to save public funds, his proposals were rejected.

The idea did not even gain the support of Čolak or Galić who had each received 29 thousand convertible marks from the budget as their retirement severance package.

In the period from the start of 2010 until the end of March 2021, a total of BAM 436,767 was paid in retirement severance packages for fifteen officials from the BiH Parliament, the BiH Council of Ministers, and the BiH Presidency. However, most of them remained in office and continued to receive a salary in addition to retirement benefits.

In addition to Galić and Čolak, these include delegates Sredoje Nović and Dušanka Majkić, representative Nebojša Radmanović, and former state-level MPs Mirsad Mešić, Krstan Simić, Boško Tomić, Petar Kunić, and Beriz Belkić, who decided to continue working after they had received their retirement severance packages.

By the end of March 2021, this enabled them to receive another BAM 2.31 million from the state institutions’ budget, not counting the severance packages.

“Continuing to serve as an MP, that’s okay, but it is completely incompatible – or at least should be – to receive severance pay and continue to receive a salary. The whole point of severance packages is to help you transition from employment into retirement. That is the purpose of the severance packages. They’re not meant as a reward,” said Damir Arnaut, MP for CIN.

An amount equivalent to six net salaries is paid “by force of law” upon reaching 65 years of age and 20 or 40 years in service.

From the beginning of 2010 to March 2021, state institutions have paid a total of BAM 17.5 million in retirement severance packages for 1,973 employees. Among them, the largest severance packages were given to elected and appointed officials on account of their average salaries being close to BAM 4,800. 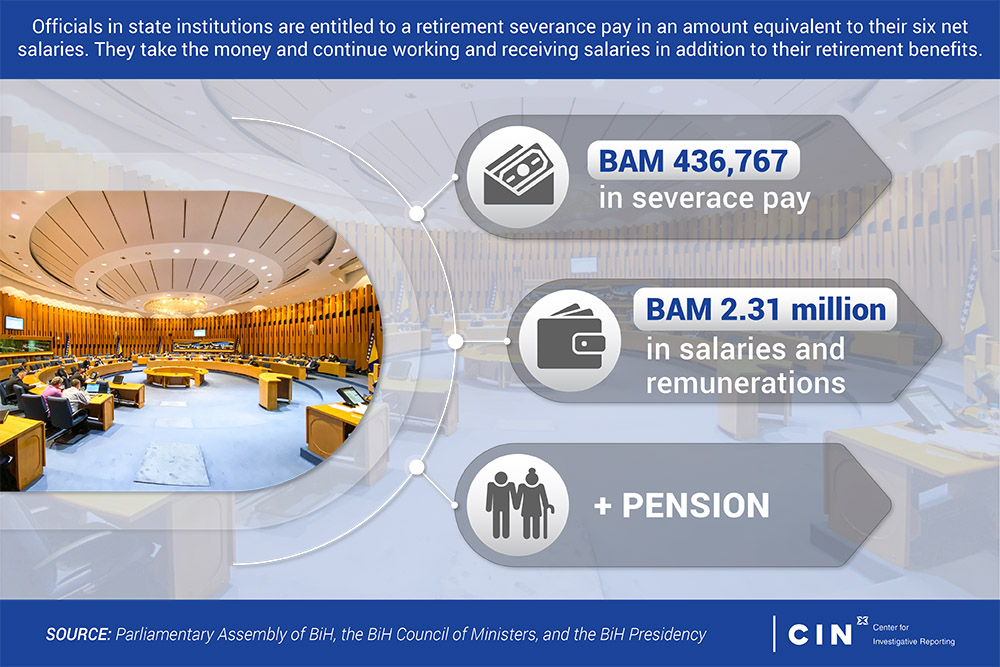 The former director of the “Šume Srpske” Public Enterprise for forest management Jakov Galić was elected to the House of Representatives of PABiH from the compensatory mandates list at the general elections in 2018. He believes the salaries of state officials are “enormous” and incommensurate with the results of their labour.

In his statement of assets submitted for the elections, he wrote that he owned real property valued at BAM 570,000 and a family business that he estimated at BAM 6 million.

“This is my first term in Parliament and I am truly surprised by the enormous salaries,” Galić said, adding that he would “vote for abolishing the salaries in their entirety” and having experts in Parliament who can contribute to “reducing tensions and helping economic recovery”.

Having received his severance payment, Galić reactivated his full-time employment status as a representative in the House of Representatives of PABiH and continued receiving a regular salary on top of his retirement benefits.

“If it were up to me, I wouldn’t retire before the end of my mandate. As far as I’m concerned, you’re absolutely right. Because I’ve looked at these lists, and contributions are still paid both for retirement and health insurance – which makes no sense,” Galić said.

As of May 2020, when he received BAM 28,997 as severance pay, he acquired the right to a pension and continued working for a monthly salary of around BAM 5,500.

As a delegate in the House of Peoples of PABiH, Bariša Čolak also retired. At the start of March 2021, he received a severance payment of BAM 29,112 but continued working for a monthly salary of BAM 5,565 while retaining the right to retirement benefits.

He had no comment when asked about the comfortable position of MPs even after they retire. 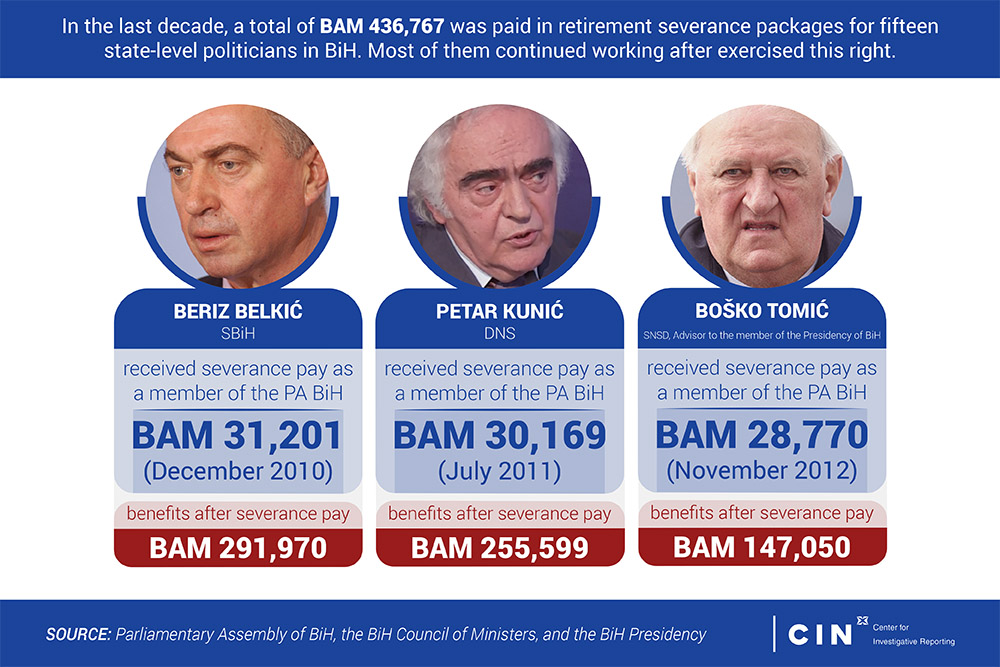 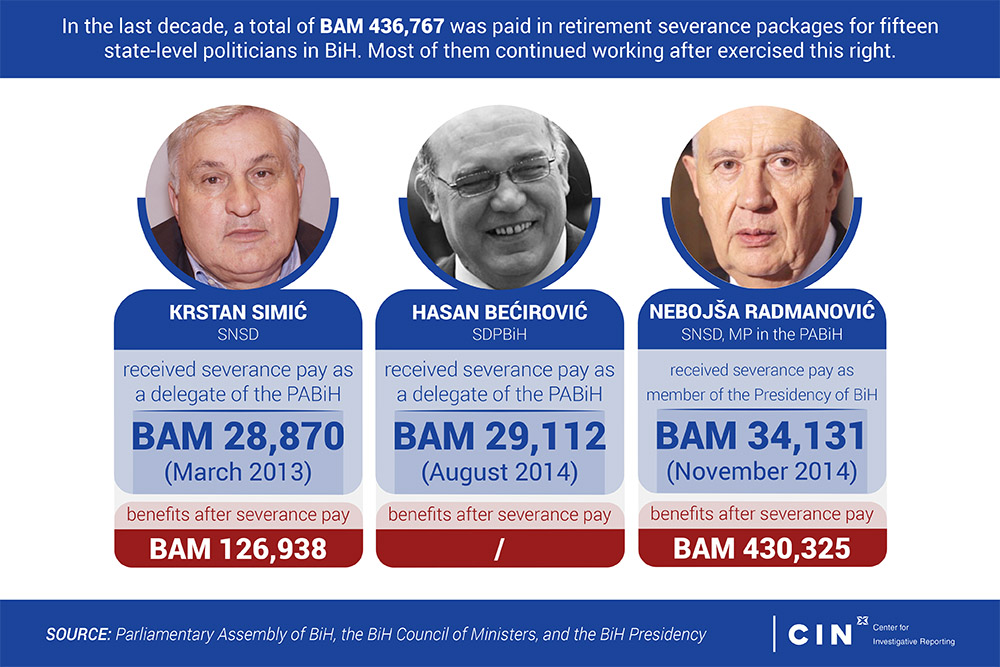 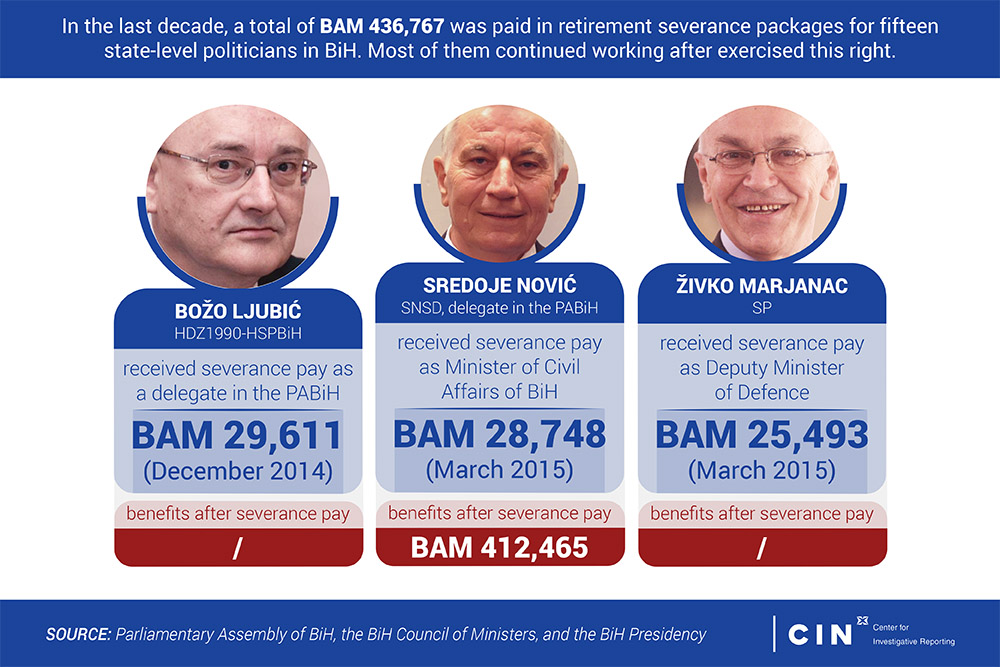 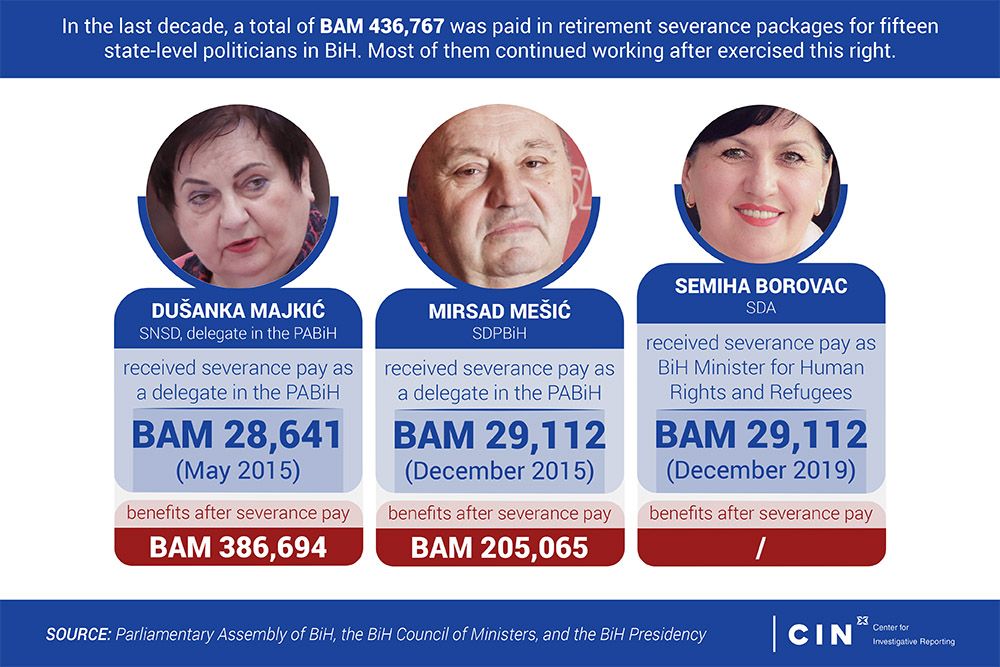 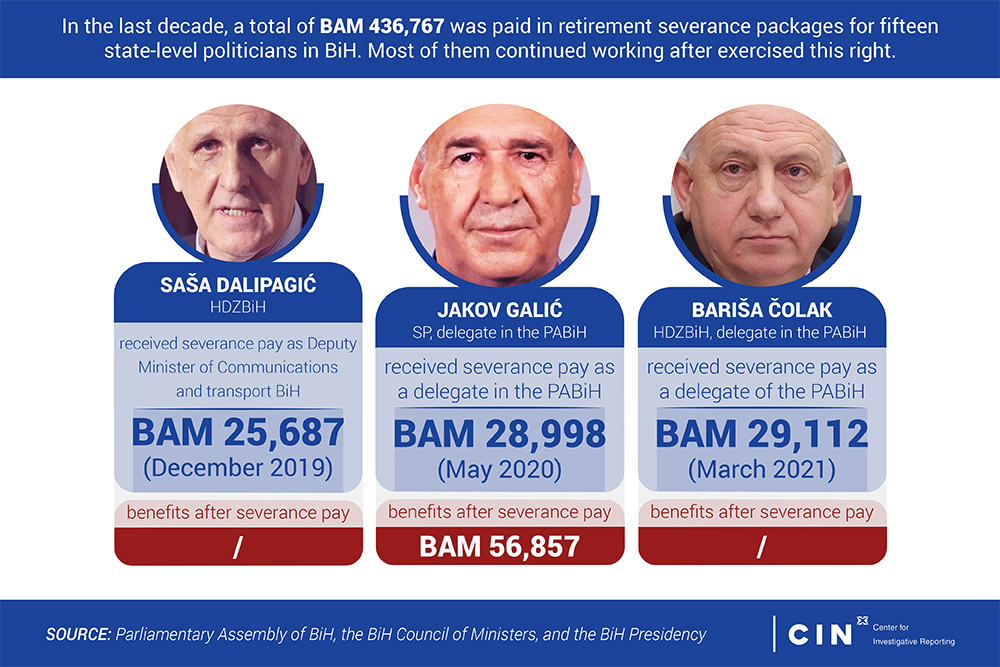 As a representative in the House of Representatives of PABiH, Dušanka Majkić received a severance payment of BAM 28 thousand in June 2015 but has continued to be employed there.

Since her retirement, she has received BAM 386,649 from the budget in salaries and remunerations, while in her statement of assets filed with the CEC, it says that her annual retirement benefits for 2018 amounted to BAM 13,200.

“Why should an MP be treated any differently from others? Isn’t that some sort of discrimination? Why should I be punished for being in Parliament?” Majkić said for CIN, adding that severance pay as an institute should be made available to everyone.

There is a difference between officials in BiH institutions and employees at the entity level, but not as Majkić would have it.

Dina Duraković, a lawyer specialising in commercial and labour law, explained that in the entities, there are no general collective agreements that would entitle everyone to severance pay upon retirement. Instead, there are less advantageous regulations that treat severance pay differently in FBiH and RS.

In FBiH, severance pay is only mandated for employees of institutions that have regulated severance pay in their rulebooks and in sectors where there are branch collective agreements, if provided for by such agreements.

“If severance pay is not regulated by the collective agreement, such as, for example, in the service sector, then everything is regulated by the employer’s rulebook. The employer must guarantee the minimum rights mandated by law, and may use the rulebook to stipulate additional rights for workers, but is not obliged to do so,” Duraković said.

The general collective agreement is not in force in RS, and instead, the RS Government Decision on determining salary increases, overtime, and benefits is being applied.

“The right to severance pay upon retirement is regulated for all workers. The amount is equal to three net salaries,” Duraković said for CIN.

In March 2015, Sredoje Nović, the former state-level minister of civil affairs, received a severance payment of BAM 28,748. After that, he became a delegate in the House of Peoples of PABiH and by 31 March this year, he has earned another BAM 412,466 from the budget in that capacity.

“Absolutely!” Nović responded when a CIN reporter asked him whether he had been receiving both a salary and retirement benefits ever since 2015. His monthly income is around BAM 5,600 and in the assets statement filed with the Central Election Commission of BiH in advance of the 2018 General Elections, he wrote that he had received retirement benefits of BAM 23,640 that year.

“…You don’t receive the severance payment for your work as a minister or an MP, you receive it for 40 years of employment,” Nović said.

The highest severance payment made in the past decade went to Nebojša Radmanović, a former member of the Presidency of BiH. In 2014, he received BAM 34,130 as severance, but then continued in employment, first as a delegate in the House of Peoples and then as a representative in the House of Representatives. In that time, by the end of March this year, he earned more than BAM 430 thousand.

“I’ve said everything there is to say about my severance pay. Everyone knows everything. I have nothing more to say.” These were the words of Radmanović whose statement of assets also includes retirement benefits totaling BAM 13,500 in 2018.

A slightly smaller amount of BAM 30,169 was paid as severance to representative Petar Kunić in 2011. At that time, he taught at the Law Faculty of the University of Banja Luka.

“University professors [in Republika Srpska] can remain in employment up to the age of 68. Then, they must retire. There is a specific case with representatives in Parliament, though, because they belong to the so-called general legal regime,” Kunić explained.

He believes that politicians who meet the requirements for severance pay and retirement benefits should be allowed to continue working to the end of their mandate, but that in such cases, they should not have the right to receive retirement benefits.

“The law should prohibit this possibility,” said Kunić who served out his mandate in Parliament in 2016 and 2017 and went on to serve as Dean of the Law Faculty in Banja Luka, which was permitted under the Law on Higher Education of RS.

At the end of July 2014, the Joint Committee for Administrative Affairs adopted a decision to award a severance payment of BAM 29,112 to Hasan Bećirović, a delegate in the House of Peoples, three months after his death.

Lawyer Dina Duraković explained for CIN that there is nothing contentious in this situation and that it is merely a procedural issue that the severance payment was made later.

“The right to the severance payment was achieved while the man was alive. […] His family could have filed a claim if it hadn’t been paid,” Duraković explained.