Citizens see little improvement after eight years of Public Administration Reform. Those responsible have not been punished for delays and negligence.

The Public Administration Reform Fund has spent 1.2 million KM to train 2,400 employees in public institutions across Bosnia and Herzegovina (BiH) in basic computer literacy that was supposed to make them more productive. It is difficult to estimate if productivity has gone up.

Training concluded two years ago, and most civil servants have a certificate. But only a few managers in government agencies do performance evaluations, so one has to take the managers’ word for it when they say that the employees are doing better.

According to an investigation by The Center for Investigative Reporting in Sarajevo (CIN), 10.3 million KM, most from donors, have been spent on public administration reform over the past eight years. Just half of the activities scheduled to be done by the end of the year have been put into place. Citizens in day-to-day encounters with the administration are unlikely to have noticed changes. 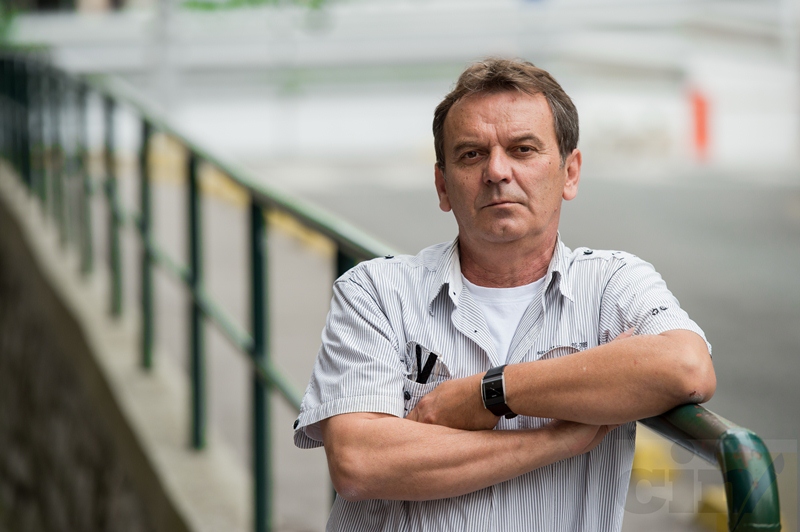 SIDA Project Manager Mario Vignjević hopes that the politicians are aware that they can lose the donors money if they do not come up with a new plan for public administration reform. (Photo: CIN)

Delays All Around, But No One Held Accountable

Public Administration Reform took off as something every country had to do as part of candidacy for European Union membership. The prime ministers of BiH, the Federation of BiH (FBiH), the Republika Srpska (RS) and the mayor of Brčko District all agreed to such reform. Then an Action Plan with the activities, deadlines and the responsibilities of individual institutions was drawn up. According to these documents, at the end of 2014, BiH should have a more efficient and accountable public administration.

Public Administration Reform Coordinator’s Office (PARCO), which is under the purview of the BiH Council of Ministers, was set up to monitor how the reforms were going. However, it can’t do much since there are no provisions about punishment.

The 2006 Strategy had six reform objectives: public finances, administrative procedures, human resource management, legislative drafting, information technologies and institutional communication. Government bodies were to do most of the work, while projects international donors financed through the Fund were to do the rest.

PARCO representatives write annual progress reports based on data about the projects financed by the Fund and the data supplied by the government agencies.

However, the head of PARCO’s Operational Unit Aleksandar Karišik said that any project, no matter how well devised and implemented, lasts only so long.

“And this is the key link—one of the problems—that government bodies do not have the responsibility to build upon the results and advance them …At some point, one has to do things without a project and pick up where the project has left off, said Karišik. 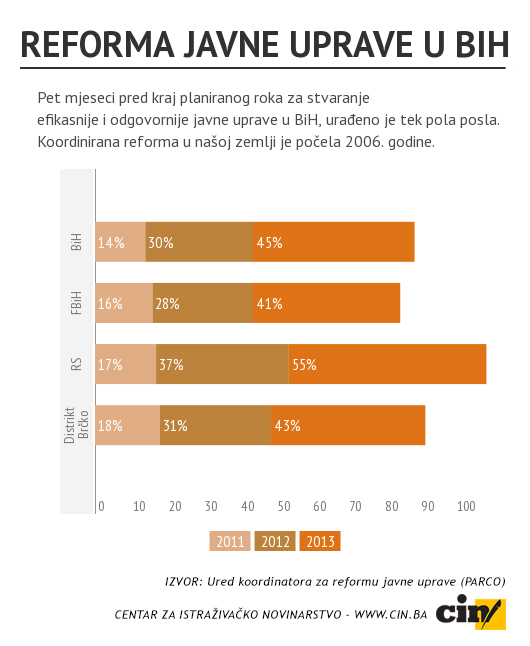 An Attempt to Require Performance Evaluations

More than 2 million KM from the Fund have been spent on the management of human resources, including training for work on computers. Even though computer skill is one of the main requirements for getting a government position, donors thought that this was needed.

“If a civil servant does not know to read what’s on his screen, if he does not know how to use a system – then it’s all for nothing. In order to make the next move, we have to make this people literate,” said Mario Vignjević, a SIDA program manager. He added that the goal of the project is a more efficient service for the citizens.

Along with computer education, PARCO has spent 750,000 KM on a performance evaluation project to monitor civil servants’ work..

For this money the state, both entities and Brčko District government agencies got new or amended rule books and guidelines on performance evaluations. The new rulebooks make it mandatory for managers to evaluate employees and submit reports with the respective Civil Service Agency which in turn should give them to the government. The goal is that management would follow the employees’ plans and results through regular meetings, while their personal goals would be incorporated into institutional goals as a way to to increase work motivation.

More than 600 managers have gotten training on performance evaluation and its significance But a year and a half after the end of the project, only the RS agencies do evaluations – mostly because the rule book in that entity has punishment provisions.

At the state level, fewer than half the government agencies have submitted reports on performance evaluation. These include mainly the agencies with few employees and just three out of nine ministries. The Ministry of Justice, one of the main bodies involved in the Public Administration Reform, has not delivered a report. The Council of Ministers, which has been charged with the evaluation of the government agencies’ managers, also has not..

In the FBiH there is no collective data on evaluations, while Brčko District has not even adopted a rule book. 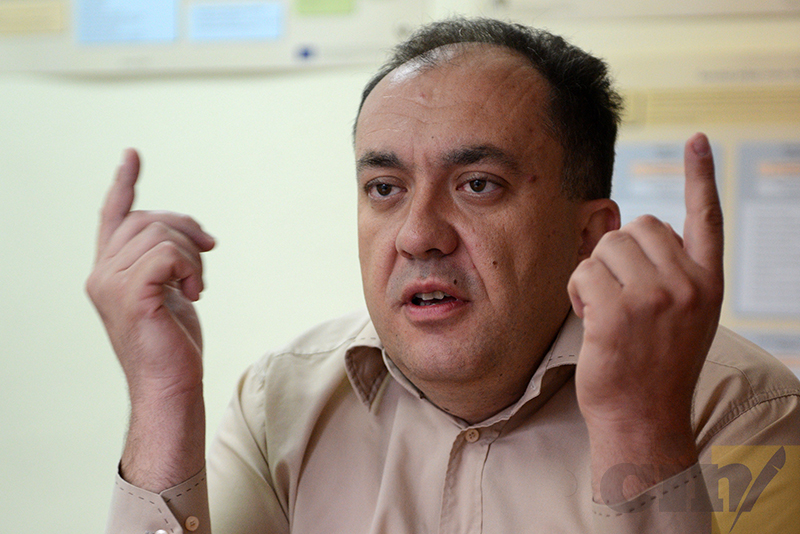 PARCO representative Aleksandar Karišik said that public administration reform cannot make a difference without the full support of the politicians and the institutions. (Photo: CIN)

Responsibility for implementing Public Administration Reform rests with the Council of Ministers, the government of both entities and the government of Brčko District. Their bosses are members of the Coordination Board for Economic Development and European Integrations, a body which took on the obligation to meet at least twice a year to appraise how the reforms were going. Since 2006, the Board had never discussed this issue.

Apart from the lack of political support, the Head of PARCO’s Operational Unit Karišik said that the goals have not been achieved due to a complex composition of the state and the need for agreement on all levels for any action.

“The third thing is people themselves, the resources and the motivation for change. I think that this could be overcome when there would be a clearer, direct focus at the political level and the reform implementation was mandatory,” said Karišik.

The final goal of the reform’s implementation is simplified administration. Citizens have yet to experience any improvement in their day-to-day encounters with bureaucracy. “This is something that a man on the street will just now start to feel”,, said PARCO representative Aneta Raić. However, no data shows which projects could affect the public’s perception of the reformed administration.

The original plan was to work on the development of the administration and the individual sectors, such as health, environment, education and others, from 2006 to 2010. By the end of 2014, those sectors should have been advanced. However, BiH has yet to go to reach that threshold.

No one has been blamed for the delays, no person and no government body. According to the EC’s 2013 Progress Report for BiH “little improvement” has been made in public administration reform.

“The process lacks the necessary political support…Continued fragmentation and politicization of the civil service system remain an issue of concern,” reads the report.

Donors Will Help if the State Pitches In

SIDA Project Manager Vignjević said that the donors know that authorities are not pushing for public administration reform, and they expected more.

The donors have set a condition — the local budgets must support the reform. So the four governments have wired a total of 755,000 KM into the Fund to date. In the next phase of the reform, around 20 million KM of donor and budget money will be available. The donors in the first phase were pleased that projects were conducted at all four levels and that governments agreed unanimously on them. At the same time they saw it as an issue, because it often takes the governments too much time to approve a project.

Vignjević said that the money for the continuation of the reform is available, but governments must come up with a new plan to replace the one that expires at the end of the year.

“I hardly doubt that someone will look the other way and say: ‘Sure, fine, we’ll continue to dole out regardless if they have met their obligations and no matter that there is no (new) plan’, said Vignjević. “The other dark presumption is that the potential donors will say: ‘Why do we need this? Let’s put our money where there are results, where the authority’s responsibility is high.”