High ranked politicians continue to conceal their property by ignoring the law which mandates that they must declare to relevant institutions everything they own.

In 2018, Fahrudin Radončić, Bosnia and Herzegovina’s Minister of Security bought a luxury yacht with a market value of around 3 million KM. Last year, on two occasions, he failed to declare the yacht.

Radončić is not the only official who has been ignoring the law and concealing some of his property. According to an investigation by the Center for Investigating Reporting in Sarajevo (CIN), another eight senior politicians have not declared twenty-odd condos, houses, offices, garages and plots of land.

Those who agreed to give an interview for this story said that they had reported all their property or that there must be some mistake. Some politicians only reported the missing property after talking to CIN reporters.

According to the Election Law in BiH, nominees and elected officials have an obligation to report with the CIK their income from the previous year and all property belonging to their close family members valued at upwards of 5,000 KM. CIK does not verify the accuracy of the asset declaration and there are no sanctions for failure to accurately report.

BiH Minister of Security Fahrudin Radončić has a yacht that seats ten persons: “Of course I have it, everyone knows that.” However, he has never declared it. (Photo illustration: princess.co.uk)

At the end of 2019, after a ten-month term at the BiH Parliament, Fahrudin Radončić was appointed as the BiH MInister of Security. When he took office, he filled out his asset declaration reporting an income of 570,000 KM from the sale of a share in “Avaz-roto press”; a house and 7.8 hectars of land in Vogošća that he assessed at 700,000 KM. He also declared property in Montenegro: a condo worth around 4.2 million KM in Tivat (Montenegro), and land in Plav that he co-owns with his brothers.

However, he kept mum about the 17.5 meter yacht “Princess 62” built in 2018. The then-legislator at the state Parliament and the president of the political party “Alliance for a Better Future” (SBB) registered the yacht in Bar, Montenegro in June 2018.

He said that he bought it with money he made from the sale of stock.

CIN earlier reported that Radončić bought 250,000 shares of Montenegro’s Telecom for 1.95 million KM in 2015. He didn’t want to reveal to reporters if he sold all of them.

“It is about legal discipline — the yacht was bought with my money from the sale of shares,” said Radončić.

Even though he didn’t declare the yacht, he told the CIN reporter that he declared all of his property.

CIN: Do you want me to show it [his asset declaration] to you?

Radončić: If it’s not there, it will be added, it’s no problem. I do everything transparently.

Radončić didn’t want to reveal how much the yacht had cost him. “This is my private matter,” he said.

There are no sanctions for these failures and CIK doesn’t have an obligation to verify the accuracy of officials’ asset declarations. The State Investigation and Protection Agency (SIPA) conducts checks only for candidates for the BiH Council of Ministers, and only for property within BiH.

SIPA officials said that when they come across inaccuracies, they report them to the incoming chairman of the Council of Ministers who is charged with nominating the new cabinet. The chairman has discretionary powers to decide what to do with the information, and is not required to report back to SIPA.

The BiH Parliament has a Commission for Appointment of the Council of Ministers which does the final interview with the candidates. One of the Commission members and a legislator, Branislav Borenović, says that the work of this Commission is only pro format. 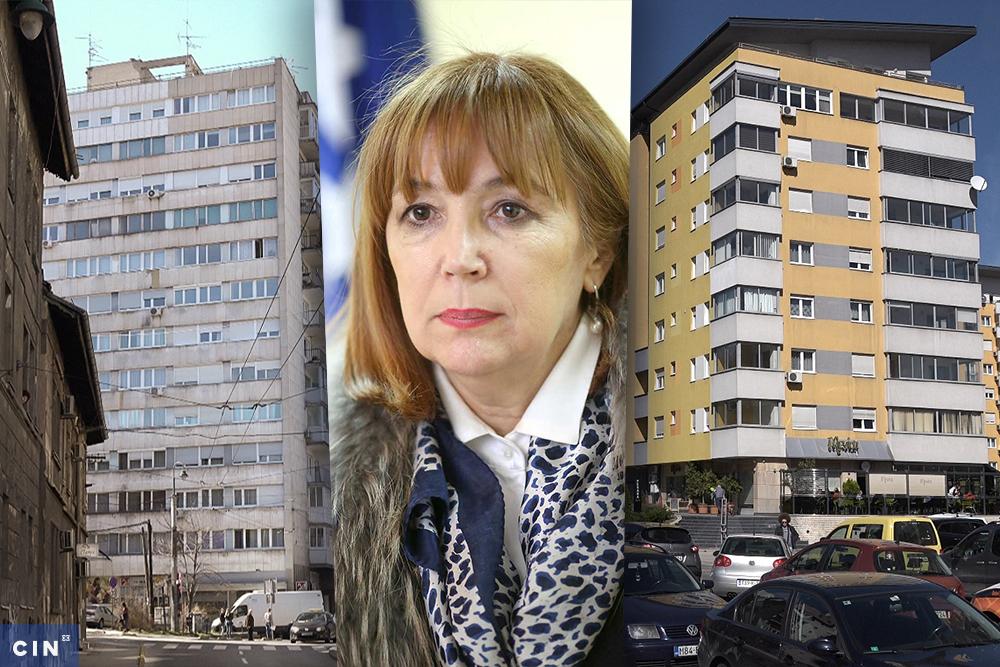 In one day, FBiH Vice-President Melika Mahmutbegović, her sisters and her daughter bought four properties in Sarajevo worth nearly 850,000 KM. Mahmutbegović has not declared co-ownership in her asset declarations. (Photo: CIN)

Vice-President of the Federation of BiH (FBiH), on a technical mandate, and a legislator in the FBiH Parliament, Melika Mahmutbegović, declared that she owned just two condos in Bugojno and Sarajevo, but failed to report another two condos, two offices, and three garages in these towns. Some of these properties she co-owns with her sisters Maksida Mahmutbegović and Maida Jusić.

One apartment, an office and two garages are in Bugojno, which the three sisters bought in 2009 based on the Law on the Sale of Apartments with Occupancy Rights. The Mahmutbegović family had enjoyed occupancy rights of the property since 1952.

The sisters bought another condo, an office and a garage in Sarajevo for nearly 693,000 KM.

Mahmutbegović, a physician with a specialization in surgery, has been in politics for more than 20 years. She was a councillor in the Central Bosnia Cantonal Assembly on the ticket of the Party of Democratic Action (SDA). Following this, she was elected as a representative in the FBiH Parliament during three terms. Since 2015, she has been the FBiH Vice-President.

In her last asset declaration from 2018, Mahmutbegović did not report the property of her daughter Neira Džumhur either. She also failed to do this in 2010, even though she stated that she financially supported her daughter.

Reporters have checked the properties of more than 120 officials and politicians of the leading and opposition parties in BiH who are in CIN’s database of “Politicians’ Assets. This database contains records on education, political and professional careers, real property, savings, investments, and loans.

Readers may find, free of charge, more than 2,000 records at the tip of their fingerprints showing politicians’ real property deeds, companies they own, asset declarations, criminal complaints, indictments and convictions.

Mahmutbegović refused to comment on her properties in an interview with a CIN reporter.

Her party boss, Bakir Izetbegović, has also been trying for years to conceal the co-ownership of land in the elite Sarajevo neighbourhood of Poljine. After he was appointed to the BiH Parliament’s House of Peoples, Izetbegović filed a new asset declaration with the CIK in the spring of 2019. However, neither he nor his wife Sebija, who won a term in the FBiH Parliament in 2018, declared that plot of land.

In 2012, the two of them bought this under 5,0000 square meter plot of land with their party colleague, Ševkija Okerić, for 243,000 KM. Bakir Izetbegović and Okerić also share the ownership of a driveway to the property for which they paid nearly 8,000 KM.

Izetbegović first denied to reporters that he owned the land. In the second interview he changed his mind. “Yes, I have declared it! I have declared everything for sure,” he said.

Apart from the plot of land, the Izetbegovićs also failed to declare a garage on Mt. Bjelašnica that Sebija Izetbegović bought for 20,000 KM in 2008. This March she stepped down as a legislator because of her obligations as the head of the University Clinical Center in Sarajevo. She ignored CIN’s call for an interview about her undeclared properties.

Another SDA member, Asim Sarajlić, also a legislator in the BiH House of Peoples, failed to report two garages that he bought for 30,000 KM in 2013.

“Maybe I overlooked this by accident, I don’t know. I need to add them,” said Sarajlić.

He did declare a flat in the same building, co-ownership of a house in Sarajevo, and a condo at a ski resort on Mt. Bjelašnica.

In an earlier CIN interview, Sarajlić said that he became an SDA member when he was 15-years old. Until the beginning of this March he was highly positioned in the party — he was a vice-president and a member of the SDA Presiding Board, as well as President of the SDA Cantonal Board in Sarajevo. He resigned from all posts after an audio recording leaked where Sarajlić could be heard negotiating the buy out of the party delegates’ votes at the elections for leadership of the SDA Cantonal Board in Sarajevo.

He was the head of Vogošća municipality for six years – until 2010. He was then a representative in the BiH Parliament for two terms. 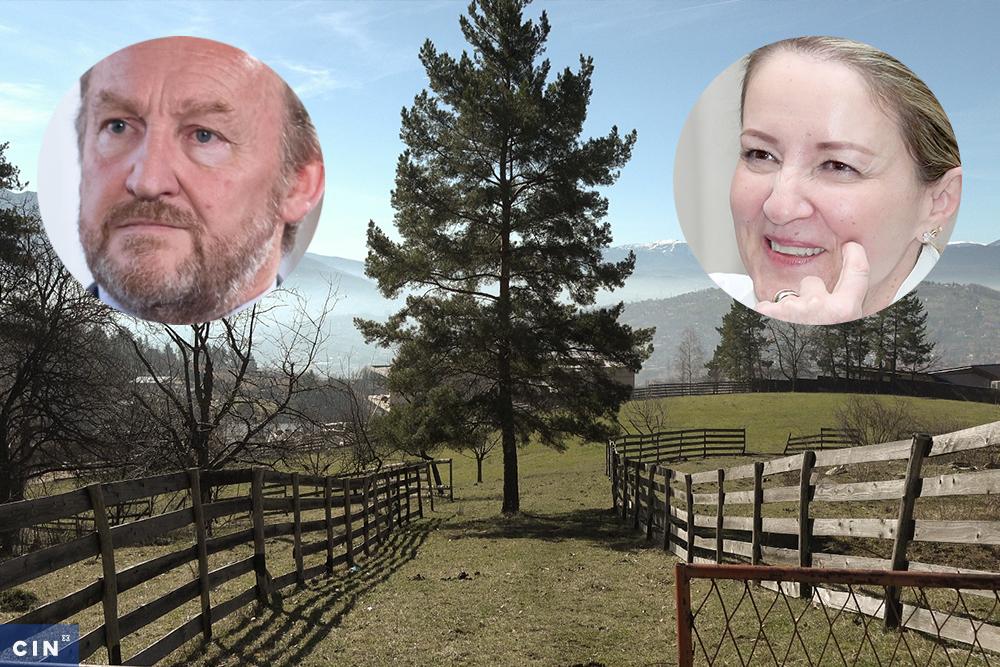 Spouses Bakir and Sebija Izetbegović invested a quarter of a million KM to buy land in the Sarajevo neighborhood of Poljine together with their party peer Ševkija Okerić. They did not declare the property in their asset declarations. (Photo: CIN)

In the March 2019 composition of the BiH Parliament’s House of Peoples, every third delegate failed to declare some of their assets to CIK and taxpayers. Apart from Radončić, Sarajlić and Izetbegović, neither Sredoje Nović from the Alliance of Independent Social Democrats (SNSD), nor Munib Jusufović from SBB BiH, declared all of their property.

In the asset declaration that Sredoje Nović filled out at the beginning of his second term as a delegate, he failed to declare a three-room apartment he owned, and a one-room apartment his wife Gina owned in Belgrade, Serbia. Nović at first maintained that he didn’t know about these condos, but he changed his mind when a CIN reporter confronted him with the documents.

“We have a condo in Belgrade, there’s nothing wrong with that,” said Nović. He added that this might have been CIK’s oversight, or his own.

Several days after the CIN interview, Nović declared these properties too.

In January 2020, Munib Jusufović joined the BiH Parliament’s House of Peoples instead of his party boss Radončić. Even though in his earlier asset declaration, he declared that his wife Zijada had a house and an orchard in Brčko worth 350,000 KM, he failed to report that this year. He told reporters that she co-owns the properties with their son Jasmin.

Jusufović first insisted that his wife’s property was listed. Then he changed his mind. “It’s a mistake then,” said Jusufovic, without explaining who made it.

The former state Minister of Foreign Trade and Economic Relations and the President of Serb Democratic Party (SDS), Mirko Šarović, also failed to declare his wife’s properties during the last general elections. Even though the law states that politicians have an obligation to report the properties owned by close family members, Šarović doesn’t see why it could be problematic that he didn’t do it. “So, the point is that the question was not about declaring my wife’s property,” said Šarović. “Everything that I own, I have declared.”

His wife Stojanka owns a house with 1,000 square meters of land in Lukavica.

Obren Petrović, until recently Šarović’s party peer and a long-running mayor of Doboj, also didn’t declare all of his properties. In 2018, he left SDS for SNSD and as a member of the new party he ran for the first time for State Parliament. He failed to report in his asset declaration that he co-owned a house and a garage in Doboj. Petrović first told reporters that he owned these properties, and then he denied it. Finally he said, “I have a lawyer too, so you ask the lawyer.”