A commission set up to investigate allegations of Dragan Čović’s conflict of interest has not convened twice because of failure to assemble a quorum.

By The Center for Investigative Reporting
The chairman of the Bosnia and Herzegovina (BiH) Presidency, Dragan Čović, might be held accountable for conflict of interest because Croatian National Assembly (HNS), a political non-governmental organization he heads has received taxpayer money.

The Law on Conflict of Interest in the BiH Institutions bans elected officials from holding executive office in non-governmental organizations financed from the budget in an amount bigger than 10,000 KM a year.

Čović was appointed the HNS president in 2014.

Documents obtained by the Center for Investigative Reporting in Sarajevo (CIN) show that HNS received a total of 16,750 KM for organizing a 25 years’ anniversary of Croatian Defense Council (HVO) last year. The money came from the budget line set aside to finance response to emergency and unanticipated events, such as floods, earthquakes or wild fires in West Herzegovina, Herzeg-Bosnia and Posavina cantons.

The largest amount or 10,750 KM was approved by the government of West Herzegovina Canton in March 2017. The HVO anniversary was held on 7th and 8th April at the Croatian Home of Herceg Stjepan Kosača in Mostar. The amount equals the costs of audio system that a firm PS Produkcija has proposed in its offer.

Four days after the event, the Posavina Canton wired to HNS’s account another 3,000 KM and nearly a month later, Herzeg-Bosnia Canton wired also 3,000 KM. The latter Canton’s government transferred the money from an account of the Tomislavgrad-based Administration for Veterans and War Victims’ Affairs.

Josip Merdžo, a secretary of HNS’s Main Council, has sent requests for funds to the cantons. Merdžo told CIN reporters that he did not have time to talk to them. After suggesting that we send questions via email, he never responded to them. 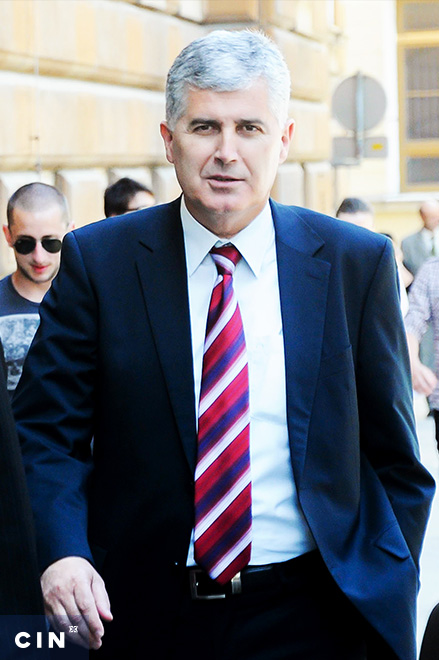 As HNS president, Dragan Čović is authorized to legally represent and sign all financial documents on behalf of this non-governmental political organization. (Photo: CIN)

The state-level Commission on Conflict of Interest had put the Čović case twice on the agenda, but it never convened. The first time around, at the end of February, the Commission’s Croatian members were absent – Čović’s colleagues from HDZ BiH – deputy chairman of the House of Peoples, Bariša Čolak, and the chairwoman of the state parliament’s House of Representatives Borjana Krišto. While Čolak is a member of HNS’s Main Council, Krišto is a member of its Presidency.

The second time, in the beginning of March, another session did not convene because the Serb members of the commission were absent. Unless at least two members of a constituency are not present, the Commission cannot reach any decisions.

Ivana Korajlić of Transparency International in BiH said that it was impossible to expect this commission to be fair when it comes to deciding about Čović.

“How can you expect a Commission member to vote in a case which is related to their party boss and to be fair and impartial while doing it,” said Korajlić.

She added that the Commission’s take on the Čović case will show how it truly works: “It’ll prove what we have been warning of for years – that a commission like this cannot be independent and cannot make decisions in a fair manner.”

Even though he did not want to speak about the case, the Commission’s president Jasmin Emrić told CIN that any elected official faces conflict of interest if he or she serves on a foundation or a citizen association that has received government grants larger than 10,000 KM.

“If a public official holds an office in a foundation or a citizen’s association that has received funds larger than 10,000 KM from any budget, no matter what the level of governance, then there’s a conflict of interest,” said Emrić. He added that there are no exceptions to this rule. 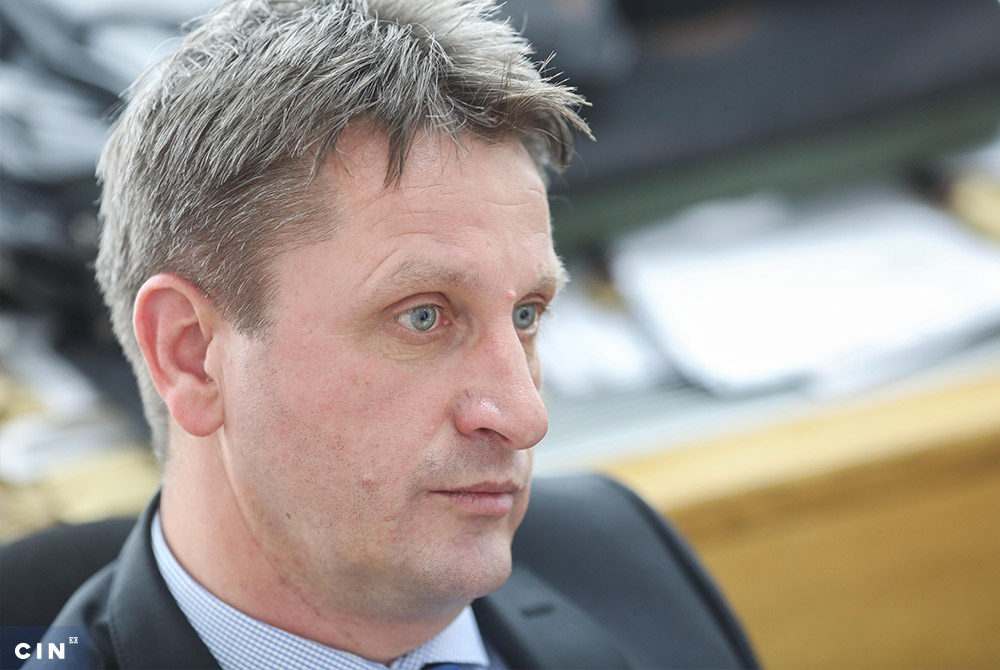 Jasmin Emrić, the president of the Commission on Conflict of Interest, said that any public official getting paid by a foundation of citizen organization that gets more than 10,000 KM in public funding is violating the law. (Photo: CIN)

Fines for Conflict of Interest

In the past, a legal provision banned candidates running for office where a conflict of interest was established, but that was erased in 2013. Now, candidates can be fined, but they are not blocked from running. Čović, for example, at worse faced the loss of half his salary for a year. But that is unlikely because the commission is known for leniency.

“So far we have only handed down monetary penalties. The range goes from 10 to 30 percent of a monthly salary for the period between three and five months,” said Emrić.

Korajlić said that the law has no teeth and the gain that an official in conflict of interest may profit from is much bigger than the fines.

HDZ BiH leader Čović was elected a member of the BiH Presidency in Oct. 2014. IN the run-up to the elections, the Assembly appointed him as the organization’s president for a term of four years. The decision on the appointment stated that Čović is authorized to represent the HNS.

The Assembly was established in 2000 as a voluntary, non-governmental and nonprofit organization. It is made up of 13 political parties headed by HDZ. 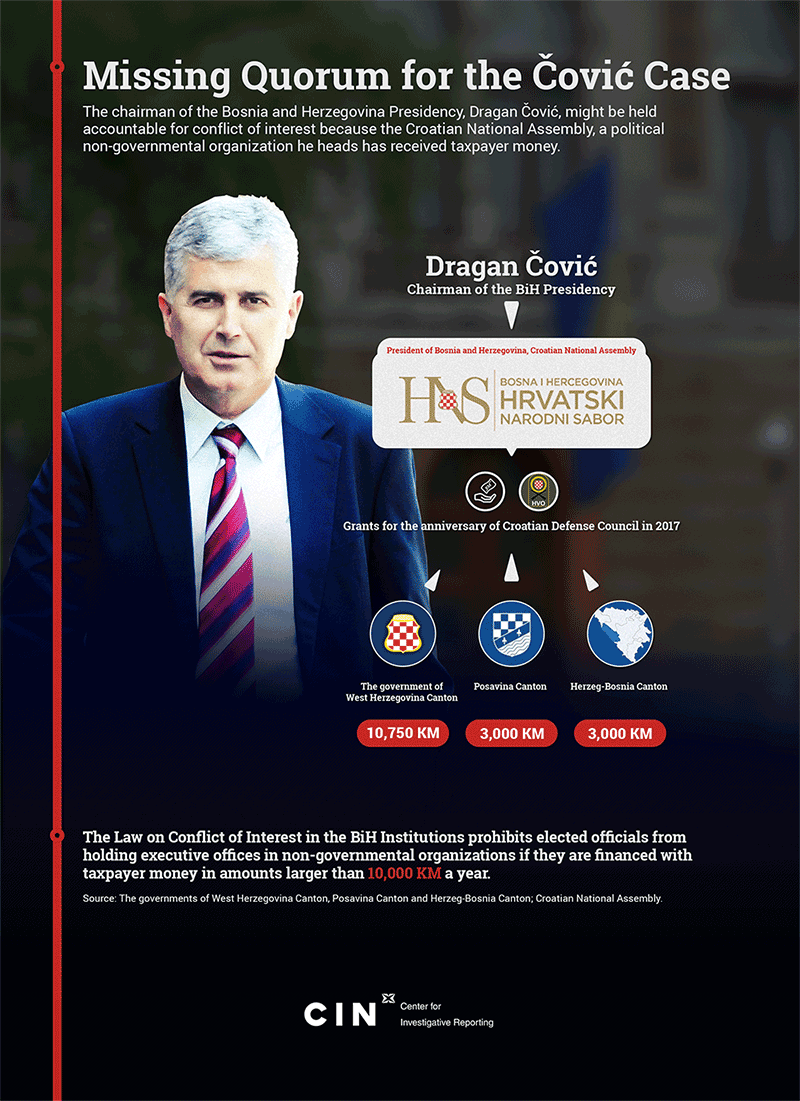