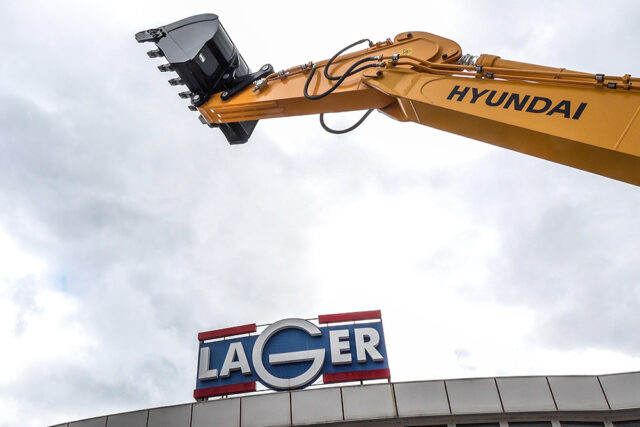 Instead of the success he hoped for when he bought a stone crusher worth almost 800,000 BAM, Anto Zeko from Gornji Vakuf experienced a business failure.

This businessman paid for a new machine, but the supplier – Lager from Posušje – delivered a crusher assembled from older parts, which quickly started to break down. zeko had to cancel the contracted work, while the installments for the repayment of the machine were falling due.

CIN reporters revealed that Lager did the same to the Đurđevik Brown Coal Mine, selling them an excavator with a replaced engine for three million marks. Also, on three other occasions, they’ve tried to sell inadequate machines to Elektroprivreda Bosne i Hercegovine (BiH).

Lager is a regional sales dealer of construction machinery made by international manufacturers and over the past five years, it has made deals with state-owned companies worth more than 16 million marks.

Entrepreneur Anto Zeko is seeking justice and compensation at the Sarajevo Municipal Court after the 2015 trade with Lager. Instead of the new Tesab stone crusher worth almost 800,000 BAM, he got a machine assembled from older parts, which began to break down fifteen days later.

Although there were twice the cheaper machines of older production on the market, Zeko decided on a new one, planning a long-term business.

Instead of the contracted yellow machine, he received a white crusher without a year of production, which is normally to be found stamped in the machine chassis. At that time, Zeko did not know that Tesab quarry crushers come in a standard yellow color, and in the court, he said that in Lager they convinced him that the wrong color was due to a typo in the specification and that such working machines need not have the year of production stamped in the chassis.  He made no further questions regarding Lager’s explanations, considering that they were a dealer of the international companies, he said.

He took over the crusher, started working, and soon had to call Lager to service the hydraulic oil leak on the machine. During the next five months, Lager was repairing various breakdowns seven more times, after which Zeko suspected that the machine was not a brand new one and addressed the Indirect Taxation Authority of BiH, asking for information on imports.

“I managed to get the information that the machine was imported on August 20, 2011, at the customs post in Gradiška”, says Zeko, claiming that he would not have bought it if he had known that, especially not at that price.

He immediately informed the supplier that he knew about the year of import: “That’s when Lager started reacting, telling me that I am incompetent, that is, that my people who operated the machine [are incompetent].”

The owner of Lager, Milenko Bašić, did not want to talk about this topic, and his company’s lawyer, Ragib Hadžić, told CIN that Tesab’s engineer looked at the crusher in February 2016 and concluded that it was used improperly. “It was tilted to one side, which led to shifting an additional load on one side of the crusher and, of course, caused breakdowns and failures,” says Hadžić.

He claims that it is common for such machines to be assembled from previously produced unused parts and that the year of production is considered to be the year when the components are assembled, which is also stated in the document of Tesab Engineering Ltd, which Lager’s defense uses in the court proceedings.

On the other hand, the court received a report of the court expert witness in the field of mechanical engineering, Mirsad Šahbazović, claiming that the failures occurred due to the poor condition of the parts of which the machine is assembled.

In an interview with CIN, the expert explained that Tesab assembles the parts into a new machine, but that for each part there must be a certificate with data on the manufacturer and the date of production, and these certificates must be handed over to the buyer, which Lager did not do.

Šahbazović explained that the crusher was not brand new when it was purchased, but was manufactured between 2008 and 2011 in Tesab factory in Northern Ireland. He concluded that the malfunctions were caused by poor quality parts of the machine.

“It can be concluded that the engine was either used or was stored for too many days or years.”

Due to the “poor condition of the crusher”, over four months, the machine worked twice as short, determined Šahbazović.

An economic expert estimated that Zeko’s company Paloč was damaged by almost 19 million marks, including the repayment of the leasing, lost profits due to uncompleted contracts, and interest.

While this litigation is being conducted at the Sarajevo Municipal Court, the Tuzla Canton Prosecutor’s Office is investigating other Lager’s deals. Another suspicious purchase they are looking at is the Hyundai hydraulic excavator with an electric drive and a 6.5 cubic meter bucket, which the Brown Coal Mine Đurđevik bought in the fall of 2014 for 3.1 million marks.

During the investigation, Hyundai confirmed that they indeed produce such excavators, but with a diesel drive and a smaller bucket, and that they delivered one such machine to Lager. Therefore, the Prosecution holds that the original engine in the excavator has been replaced.

“Hence, at least two of the items are not original and do not match the original excavator produced by Hyundai,” says the former director of Rudnik Jasmin Rahimić, adding that he will sue Lager because he believes that Rudnik was deceived: “If you want to buy an original Adidas sneaker and they sell you a Chinese one, then you have a problem.”

The excavator in Rudnik works with sporadic breakdowns.

Lager’s lawyer Hadžić admits that the machine was modified: “That is undisputed, but it was done with the knowledge and consent of the manufacturer.“

In 2019, Lager’s revenues were BAM 246 million, of which BAM 1.85 million from business with public institutions. This company represents, distributes, sells, and services construction machines and parts, and mines are being their frequent customers.

CIN holds the documentation which shows that after the trade with Zeko, Lager tried to sell machines with parts of an unknown manufacturer to Elektroprivreda BiH for the needs of the Đurđevik and Kakanj mines. Also, they altered the catalogs by adding data on machines that were not in the original offer in order to comply with the tender requirements.

In 2016, Elektroprivreda BiH was purchasing a trencher with a bucket volume of at least 1m3 for Đurđevik mine for BAM 300,000. Lager submitted a product catalog, which was altered, so EPBiH did not accept it. During the additional check, EPBiH found that Lager provided incorrect information claiming in the offer that the bucket of the excavator was produced by Hyundai. Besides, the excavator offered by Lager was not a new generation machine nor is it intended for deep dig bucket work – as was required by the public call. The tender was ultimately canceled in September 2017. 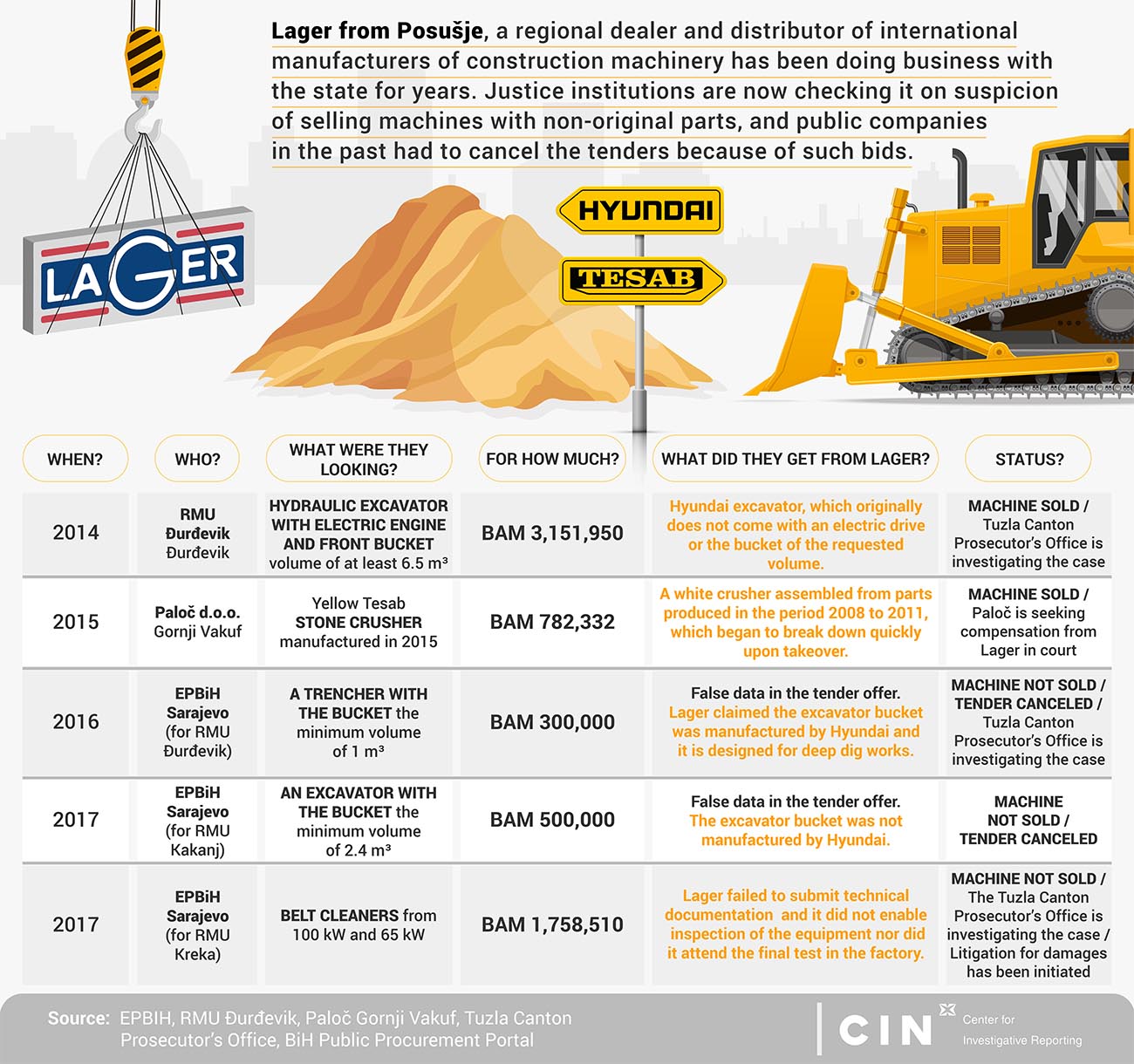 In the same year, Lager tried to sell another excavator to Elektroprivreda BiH – this time with a bucket volume of at least 2.4 cubic meters – for about half a million marks, for the Kakanj Brown Coal Mine. In the public procurement procedure, Elektroprivreda established that Lager’s offer was untrue. Lager offered an excavator manufactured by Hyundai, but the bucket on it was found not to have been manufactured by that manufacturer. In 2018, the tender was canceled.

A year earlier, the Kreka Coal Mine refused to take over and pay for the belt cleaners worth BAM 1.7 million because Lager did not deliver them in accordance with the tender requirements, i.e., it failed to submit the technical documentation and it did not allow the inspection of the equipment nor did it attend the final test in the factory. This procurement is the subject of a dispute at the Široki Brijeg Municipal Court, which is suspended until the investigation conducted by the Tuzla Canton Prosecutor’s Office is completed.

Elektroprivreda BiH did not want to discuss this topic, and the Prosecutor’s Office confirmed that because of the sale and attempted sale of excavator they are conducting an investigation against the owner of Lager Milenko Bašić and one of the directors of that company on suspicion of abusing their position and forging official documents. The prosecutorial decision has not yet been made.