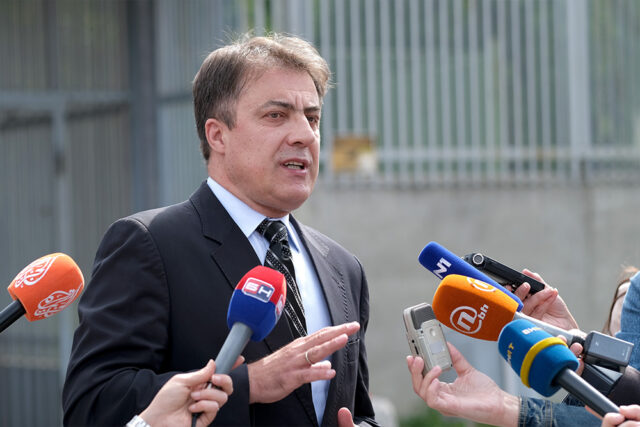 The Court of Bosnia and Herzegovina (BiH) sentenced Kemal Čaušević, former director of the ITA BiH, to nine years in prison by the first instance verdict, and his BAM 1.72 million worth real estate and BAM 575,239 in cash is to be confiscated.

Anes Sadiković, a textile trader, who has been accused together with Čaušević, was sentenced to two years in prison for giving gifts and other forms of benefit.

Čaušević was acquitted of the charges for abuse of office.

According to the indictment, Čaušević favored the company of Sadiković and that of Sedinet Karić, also a textile trader, who was, following a plea bargain four years ago, sentenced to a prison term of one year for giving gifts and other benefits. Their companies were charged lower import duties against the invoices, and the goods they imported were not thoroughly inspected at customs.

According to the indictment, Čaušević received a BAM 1,000 from Sadiković and Karić for each truck of goods. In that way, he gained a million-dollar benefit, which will be taken away from him by the verdict, and caused multi-million damage to the budget and all the citizens of Bosnia and Herzegovina, since the actual amounts of customs duties were not charged.

“Even if I stole some money, I certainly wouldn’t be making purchases with that money. Not only because no purchase should be made with ‘haram’ money, but because I don’t think of myself as stupid.  I may not be smart, but I don’t think I’m a stupid man. Hence, this is the retaliation of judiciary – not of the politics – which  I have exposed”, said Kemal Čaušević after the verdict was pronounced.

The Former Head of UIO BiH Owns a Million in Assets

In April 2013, the CIN wrote about the assets of Čaušević, who during the seven years bought nine apartments and offices plus 20,000 square meters of land, while his income at the time could not come close to the cost of the expensive real estate. The income of BAM 576,000 he has received in salaries and benefits, was not nearly sufficient to account for the investments in property worth one million eighty thousand BAM.

A few days after CIN published the story, the Court of BiH imposed restrictions on eleven of his real estates. The Court decided by the first-instance decision that these real estates will be confiscated.

Čaušević was arrested in June 2014, along with 53 people in the operation “Pandora”. Among the arrested were also employees of the ITA and customs terminals. Reading the reasoning of the verdict, the judge said that the trial lasted a long time because Čaušević changed three defense attorneys, submitted several requests for disqualification of judges and prosecutors, and because of the coronary virus pandemic.