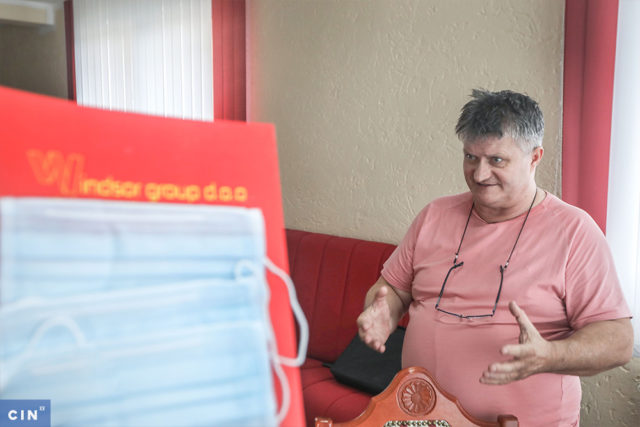 Director of “Windsor Group”, Sead Žilo, welcomes the reporters in a spacious Živnice office furnished with a style furniture. In an attempt to reinforce the impression of a successful businessman, he tells the story of his early success when he “had more money than he could possibly spend”.

Behind that facade stands a man with at least eight convictions in Bosnia and Herzegovina (BiH) and Croatia for fraud and evasion. He damaged individuals and companies for a little over BAM 260,000, mostly by offering them services and goods that he never delivered.

With four final convictions, he spend three and a half years in jail. He was twice sentenced to a suspended sentence and expelled from Croatia, and the two sentences of 6 and 12 months he redeemed for BAM 54,500.

One of the injured parties, Branislav Đokić from Bijeljina, is dissatisfied with the justice allowing the career criminal to redeem his freedom: “The state took the money. They run business! It suits them to have Žilo and the like to work for them.”

Đokić and other injured parties can go to court to seek damages, while Žilo has bought his freedom and continued his business as usual. The police arrested him again in October this year for fraud and he is now in custody.

New victims of his frauds from last year and this year have reached out to judicial institutions: Aleksandar Denda from Bileća, Naim Hamzabegović from Cazin, and Emir Begović from Gračanica. They gave Žilo a total of a quarter of a million for CNC machines and surgical masks, which they never received.

They learned about Žilo through an Internet advertisement where his company “Windsor Group” offered for sale machines for the production of surgical masks, CNC machines, and raw materials for furniture production and training to operate the machines. Žilo offered to all of them the payment in several installments, with deferred payment or payment in kind, which facilitated the purchase agreements.

Denda wanted a CNC woodworking machine to start a new business. He embraced the Žilo’s offer to buy a machine worth BAM 27,200. The agreement was that he should pay BAM 14,000 in cash, and the remaining BAM 13,200 in monthly installments over two years. Also, Žilo offered Denda to supply him with raw materials for the production of wooden furniture, which he would later buy from him.

After several talks and agreements in Bileća and Živinice, Denda was convinced that this was a good business opportunity. In September 2019, he signed a contract on the purchase of the machine and cooperation with Žilo. He took out a loan, paid the agreed part of the money, but he never got the machine.

“The machine will arrive in 15 days.”, “It’s about to come”, “this-that”, Denda recalled Žilo’s excuses for delayed delivery. Among the excuses, he claimed to have had a death in the family: “For example, the machine should have arrived in Bileća tomorrow, but he claims that his brother had died. So, he could not come”, says Denda.

Having realized that he had been deceived, without a permanent job and with a loan to repay, he turned to a lawyer early this year and filed both civil and criminal cases.

Segmedina Srna Bajramović, a deputy in the House of Peoples of the Parliament of the Federation of Bosnia and Herzegovina (FBiH), filed an initiative in September 2019 to change the FBIH Criminal Code. She suggested deleting the possibility of replacing a prison sentence of up to one year with a fine and stated the reasons for that:
– The provision was introduced due to the lack of prisons, which have been built in the meantime
– It is not known what the money collected in this way was spent on
– The provision favors wealthier convicts
– The state thus legalizes proceeds of crime
– The provisions are not the same at all levels of government.
To date, there has been no reaction from the authorities to the initiative.

According to him, Žilo told him that he won’t be able to collect damages through the court by 2028. He told him that only lunatics go to court.

“He knows what our courts and prosecutors’ offices are like, he knows that court proceedings are slow and take time and he takes advantage of the loopholes”, says Denda.

Naim Hamzibegović, a manufacturer of style furniture from Cazin, has confidence in courts, and he decided to report doing “business” with Žilo. He got in touch with him last year when he needed a large machine to build a crescent-shaped Noah’s ark for a local mosque. Žilo and his family visited him in Cazin, praised Hamzabegović’s production, and convinced him to buy not one but two machines for BAM 91,602.

“This gentleman is extremely good at professional terminology, ‘the strips’, ‘the functions’, ‘the depth’, ‘programs’, ‘programming’, and all that”, recalls Hamzabegović. They agreed that Hamzibegović should pay one part of the deal, and compensate the remaining part through stylish furniture and three CNC machines that Hamzabegović had in his workshop.

“These are all two or three-year-old machines that I bought in Germany”, explains Hamzabegović. He paid Žilo BAM 15,340 and gave him machines and furniture, which today adorn his business premises in Živinice, worth a total of BAM 10,700.

However, Žilo never delivered the machines to him.

He initiated civil proceedings and pressed criminal charges against Žilo. “I am so looking forward to the meeting in court and before the court”, says Hamzabegović.

Criminal charges filed by Dendo and Hamzabegović ended up in the Tuzla Canton Prosecutor’s Office, which already filed two court cases against Žilo for fraud against persons from Sarajevo, Mostar and Velika Kladuša.

Upon the order of this Prosecutor’s Office, Žilo was arrested and remanded in one-month custody. Before his arrest, he spoke to CIN reporters claiming that he was given a bad name unfoundedly and that Denda and Hamzabegovic did not receive the goods because they did not pay for them in full. He will pay them back if and when the court so decides.

However, it is a long way. Injured parties are generally instructed to initiate a new court case for damages. Some of Žilo’s victims have not yet done that. Among them is Branislav Đokić, the owner of the Bijeljina company “Logo”, who in 2013 gave Sead Žilo and his wife Lidija Boros BAM 15,022 and five pharmacy cross display signs worth BAM 3,217 in exchange for a printing machine he never received.

“I realized that I would be at a loss again if I got to court and extend this agony. He’s been doing this consciously, and the state allows him such conduct. (…) My lawyer told me ‘OK, we will win, no doubt, but you won’t be able to enforce the claim against him”, says Branislav Đokić.

In 2019, the Zenica Municipal Court sentenced Žilo to one year in prison and Žilo’s wife to a suspended sentence for this fraud. Žilo exchanged the prison sentence for a fine of BAM 36,500. He paid it in March this year, breaking the set deadline, so the Court ordered that his money be returned to him and he should soon be ordered to go to jail. However, Žilo used the time after the verdict to continue with the frauds.

Emir Begović from Gračanica not only lost his money but became the subject of an investigation due to his business with Žilo.

In March 2020, at the beginning of the coronavirus pandemic, Begović agreed with Žilo to buy 13,850,000 surgical masks for 9 pfennigs per piece.

To Begović, it looked like an exceptional business opportunity because he had a buyer in Slovenia, Borut Čeh, the owner of the company “Labena”, who would buy those masks for six times the price. “I didn’t want to miss it”, Begović told CIN.

The thought that he could earn BAM 6.2 million from the mask trade clouded his mind to such an extent that he did not think it was too low a price for such sought-after goods, nor did he check whether Žilo’s Windsor Group was registered to trade in medical equipment.

“It was smoke and mirrors, but I naively went for it,” Begović told CIN, explaining that they had agreed on the payment in installments.

Based on a Pro-forma invoice, Begović paid BAM 10,000 to the Žilo’s company account and claims to have given him a total of BAM 200,000 in cash on two occasions, which he had from the sale of the apartment. He wanted, as he says, to present himself as a serious partner and secure the goods.

“I naively got into that deal, without signing a contract, without anything,” says Begović.

At the same time, he made delivery contracts with Borut Čeh, explaining that the goods will be transported by “the Windsor Group” because his company “Global Traffic” is not registered for export business. For that purpose, Žilo provided him a certificate on the conformity of the goods with the EU requirements, which would later prove to be false.

“The earnings were really huge and the numbers were huge. I’m young and my only mistake is that I was after the money. I saw a huge figure, and I thought it is easy money”, says 29-year-old Begović.

They agreed that the masks be delivered to Sežana, Slovenia by March 18, 2020, and on that day, Čeh paid him an advance of nearly BAM 600,000. However, the goods were not delivered and Begović realized that Žilo had swindled him.

“It became clear to me on the 18th (of March) when he told me that the drivers had taken off but they wanted to take a rest. I begged him, I almost cried, begging him to give me the phone number of the driver or the license plate number. I realized that he was jerking me around. It was clear to me”, says Begović.

As the masks had been intended for sale to the Slovenian Government, i.e. to their health institutions, this stirred an uproar in that country. At the press conference, the representatives of the authorities announced that “Global promet” had deceived them, since a contract had been signed with that company. Soon, an investigation was launched.

The case was taken over by the Prosecutor’s Office of Bosnia and Herzegovina, which ordered the blocking of the account of Begović’s company and placing the advance payment by “Labenin” on a special account. The prosecution has not yet decided whether and against whom to file an indictment.

On the other hand, Begović filed a civil court case against Žilo and his “Windsor” company before the Tuzla Municipal Court, seeking damages of BAM 210,000.

In an interview with CIN, Žilo said that he had masks in a warehouse in China and that he did not bring them to BiH because Begović did not pay him the full amount, so he did not take the job seriously even though he received BAM 10,000 KM as a guarantee. He claims that Begović did not give him BAM 200,000 in cash.

“Listen, a normal person should have some kind of document for the sums of money that you talk about, some proof”.

Lawsuits and investigations do not worry Sead Žilo.

“I am not afraid of the police, SIPA, prison, or courts because I know that I am clean, but how will I explain it to my 8-year-old daughter who comes to school where she is told that her father did this or that … . “.