Between 2013 and 2016, the Sarajevo Canton Health Insurance Bureau has spent more than 580,000 KM on commissions and teams appointed by its Board of Directors. Federation of Bosnia and Herzegovina (FBiH) auditors say some of that money was misspent.

The Board, headed by Esed Radeljaš, a politician once sentenced for fraud, did the appointments. Radeljaš was offered the office after the Party of Democratic Action (SDA) reached a deal with his Bosnian Party (BOSS) to form a cantonal government.

When he came to the Bureau in early 2013, three commissions were in place. They each had six members and took charge of decisions about the lists of medicine, patients’ rights, and their medical treatment abroad.

Money for Health Care in Hands of Fraudsters

Two months into his term, Radeljaš dissolved those groups and appointed new ones – each with double the number of members. He also set up three additional commissions and three teams.

The members got monthly allowances worth between 300 KM and 500 KM, but Bureau officials say that they don’t have reports and minutes about their work. Over three years’ commission members collected 582,700 KM in allowances.

Reporters from the Center for Investigative Reporting in Sarajevo (CIN) could not talk about this with Radeljaš who is in custody on charges of money laundering and bribing, as CIN has reported.

A team to prepare for Board meetings was set up in February 2013 with the task of organizing materials needed for the sessions and following up on board decisions.

The members of this team consisted of then Bureau Director Faris Gavrankapetanović; Sarajevo Canton Health Minister Eldan Lokmić and two Bureau employees. They got 500 KM a month.  But preparing materials for meetings is part of the Bureau director’s regular duties. Auditors warned that there was no justification for these allowances.

Lokmić told CIN reporters that the Ministry has an obligation to participate in the Board’s work by preparing all documents and that he would, most probably, take part in it even if he had not been appointed to the team. He said Gavrankapetanović proposed the idea of the team. Gavrankapetanović told CIN that he needed to go over the decision on appointments before he could talk about it.

Gavrankapetanović sat on three teams and one commission before he was sacked in December 2013, when Kenan Crnkić was appointed the new director of the Bureau. Crnkić did not respond to CIN’s calls.

Along with their managerial salary of at least 4,800 KM a month, Gavrankapetanović and Crnkić collected 6,000 KM each as members of the preparation team doing work they had already been paid to do.

In July 2013, Radeljaš signed the appointment of the Team for the Preparation of the Supervisory Board’s Sessions on which Gavrankapetanović also served, and later Crnkić took over from him. On the team were also another two of the Bureau’s employees and altogether they collected 31,600 KM over two and a half years.

Both teams were disbanded in December 2015 by decisions of the new Board of Directors. Then Board chair, Jasmina Selimović, said there was no evidence they worked effectively and efficiently while unnecessarily being a cost to the Bureau. 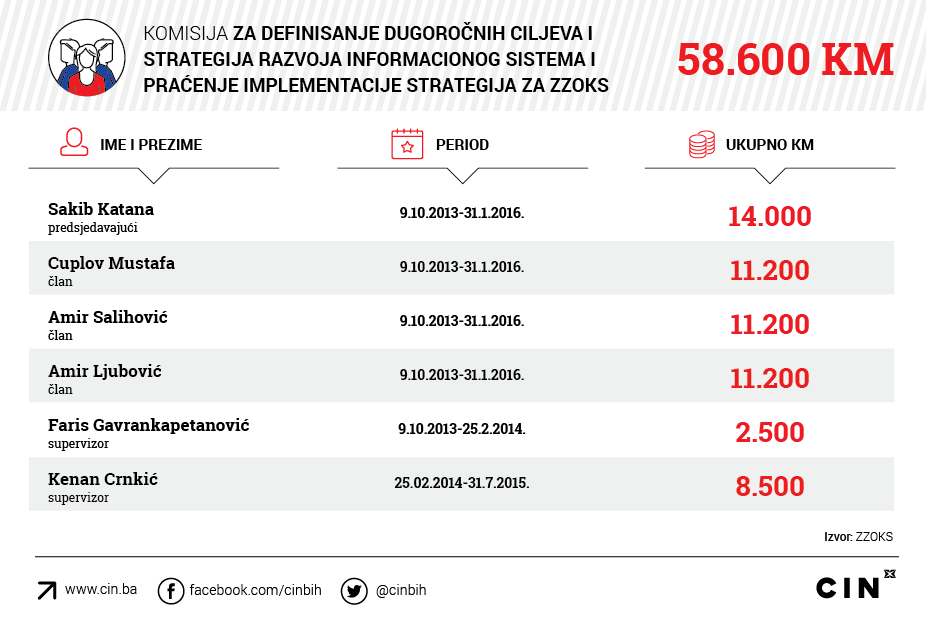 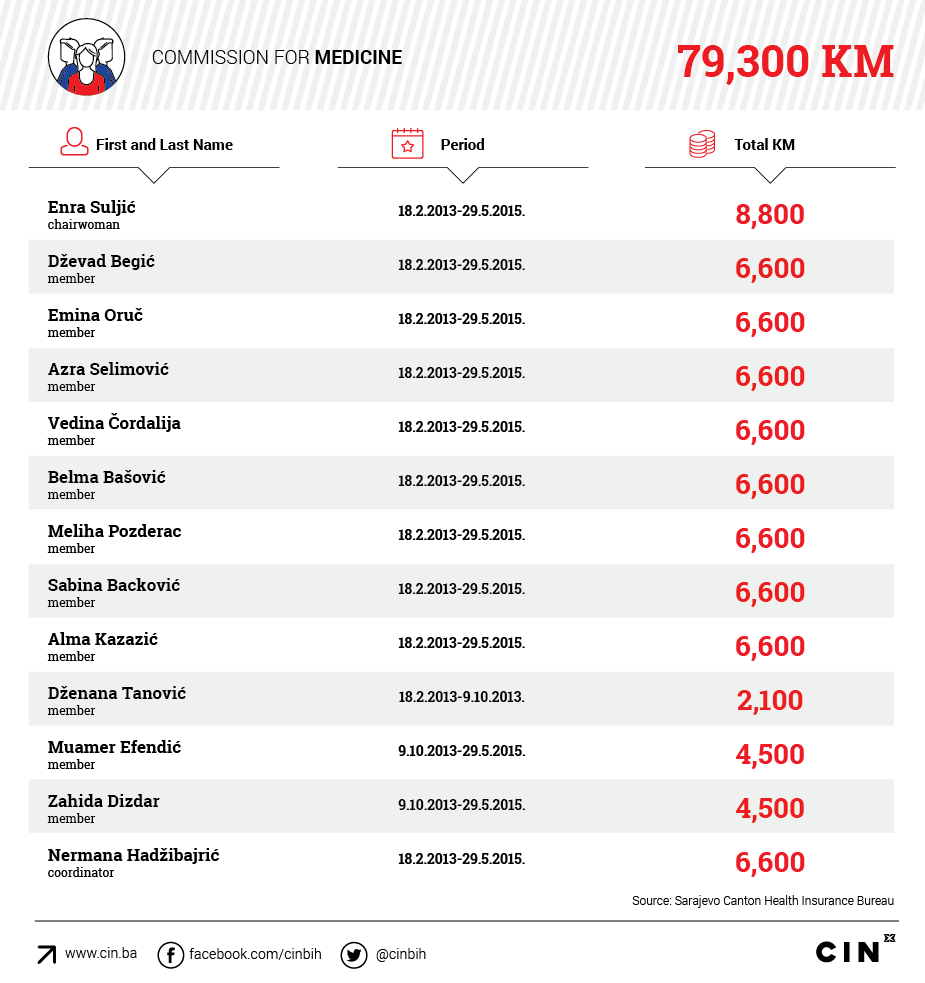 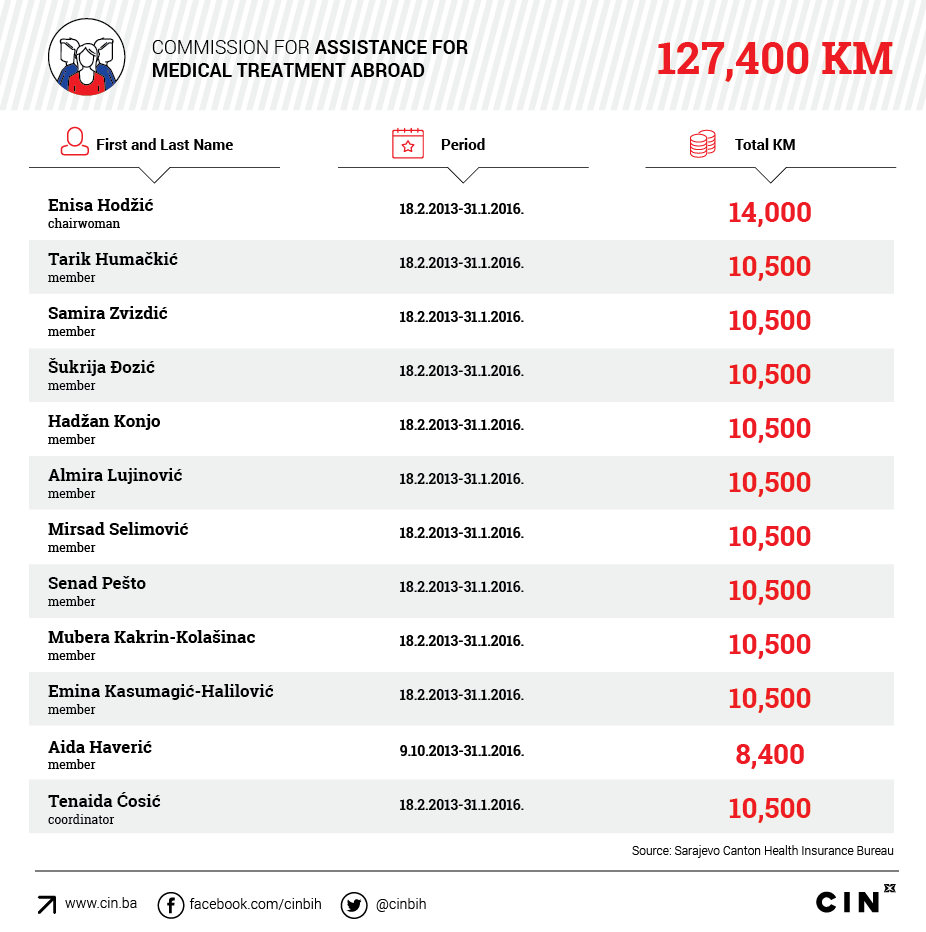 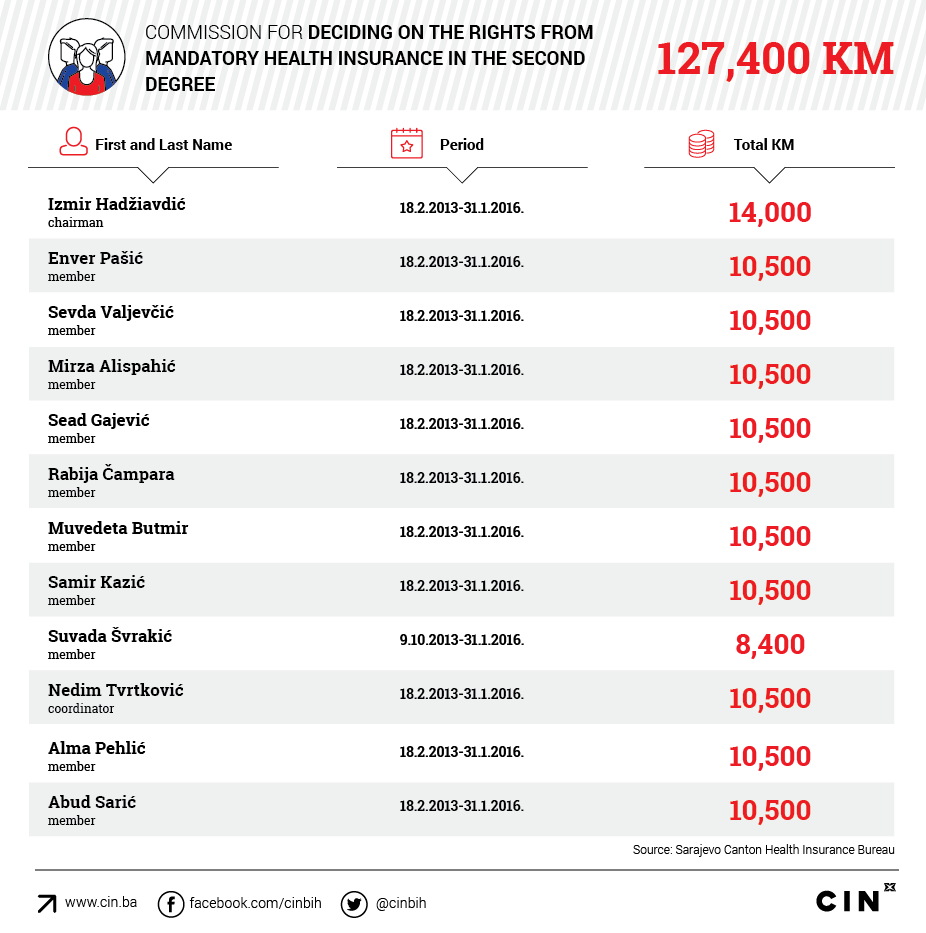 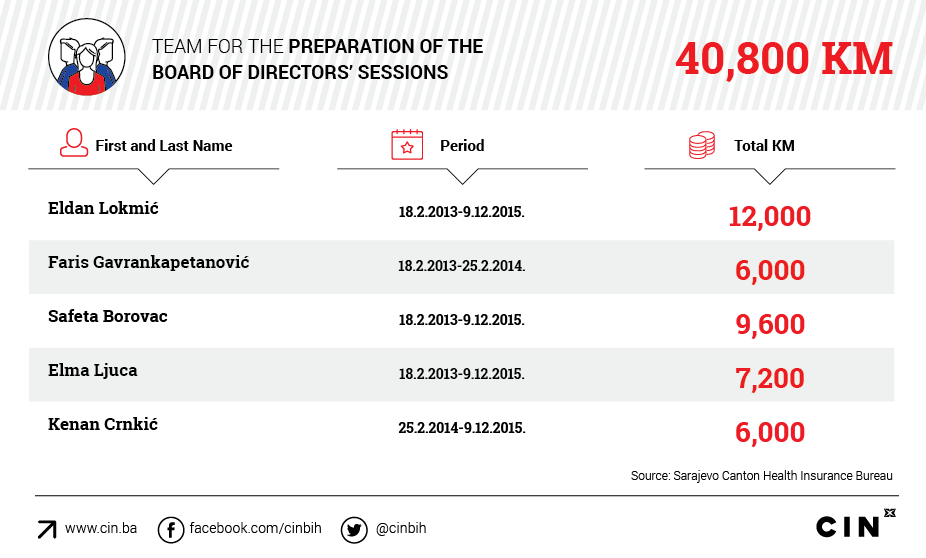 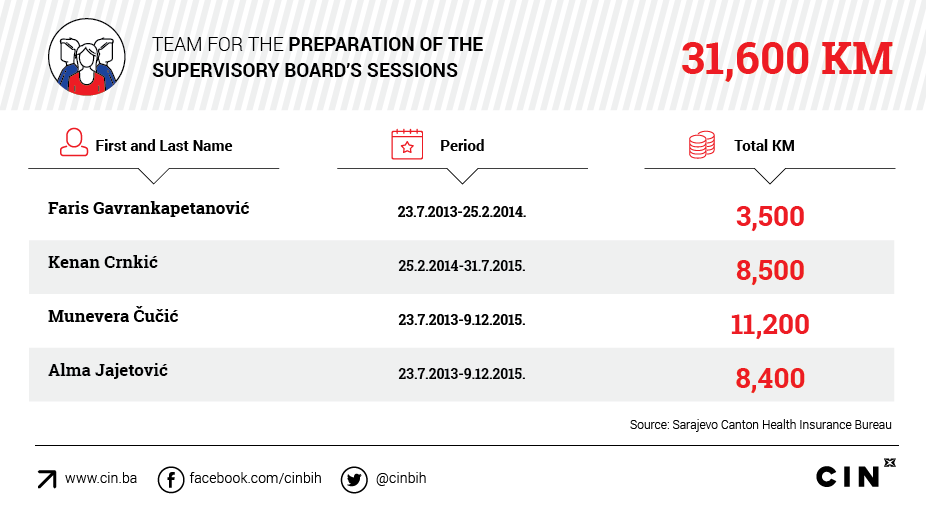 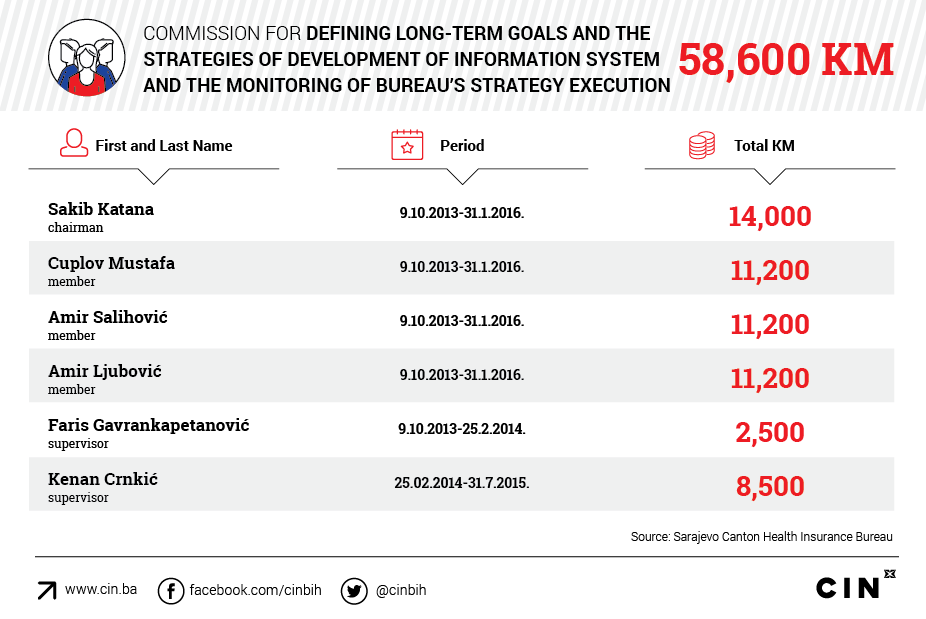 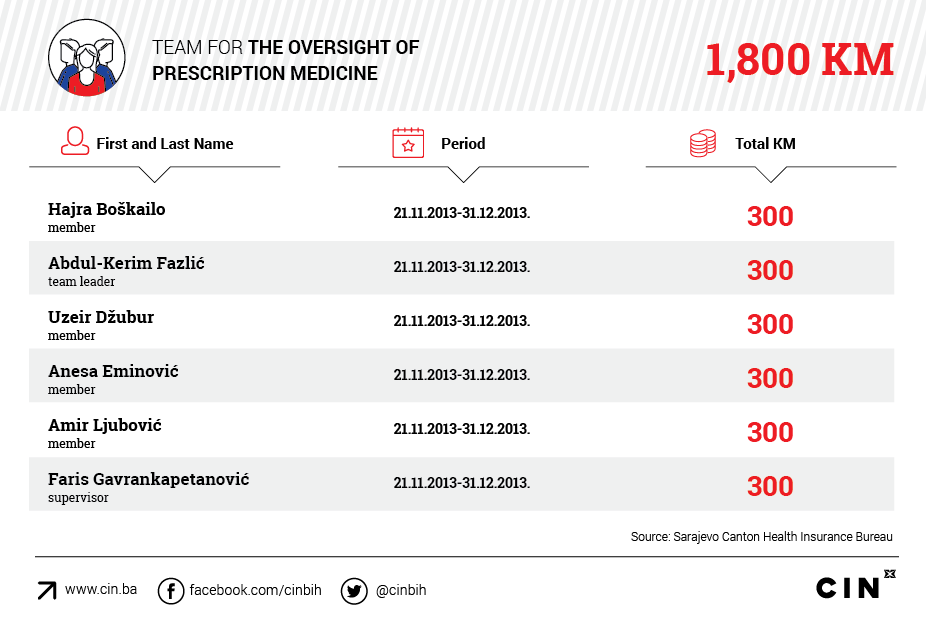 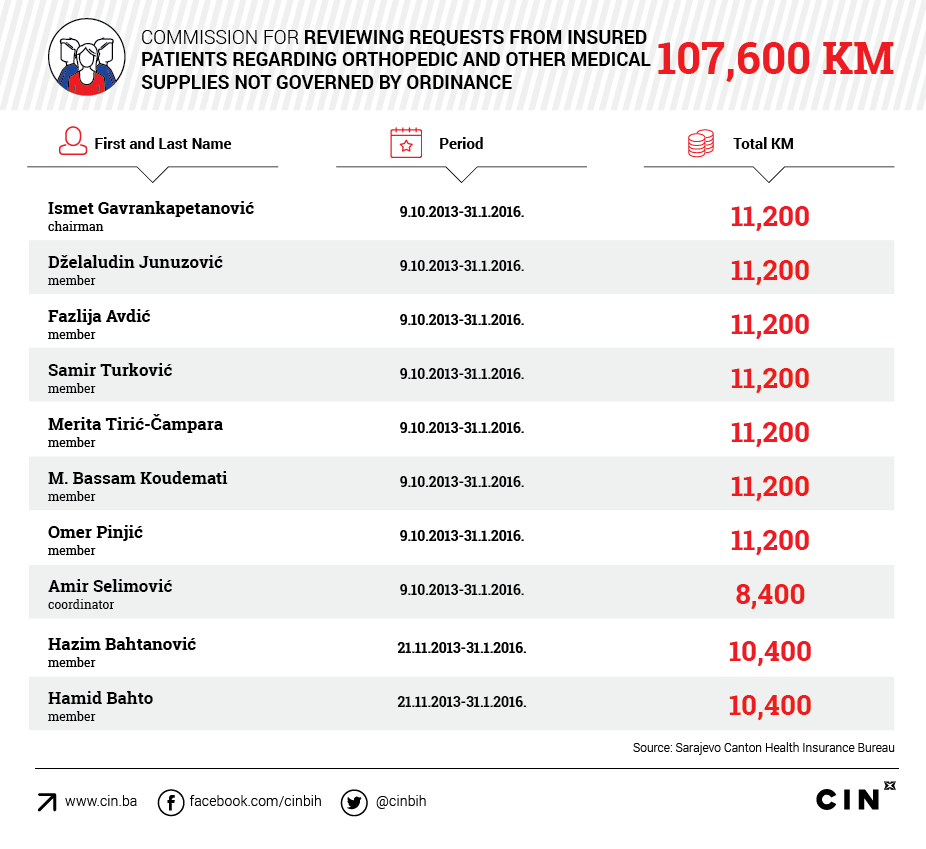 In April 2013, the Board also set up a Commission for Medical Rehabilitation which was supposed to handle and approve applications for medical rehabilitation services. Four physicians and the then Radeljaš’s colleagues from BOSS, Haris Pleho and Rasim Smajić, were appointed to it. A coordinator was appointed later.

Commission chair Dr. Abud Sarić, said the Ministry called him to be part of the commission: “And on the first constitutive meeting I took the Bureau’s operating procedure and saw that this commission absolutely did not exist, nor there was anything for the commission to work on or to implement.”

Sarić said that after that first meeting he asked for an explanation from the Board of Directors as to what the Commission was supposed to do. And then he was relieved of duty.

Commission members Džemal Pecar and Aida Nišić say that the Commission met twice more. “We met once and the following time we parted our ways – this was the two times,” said Pecar. He said there were rules in place about how the heads of clinics, at the physicians’ recommendation, would send patients for rehabilitation. During the four months of the Commission’s existence, its members collected 8,200 KM.

Nišić said that she was unsure why the commission was disbanded: “Probably the system went via the Bureau. It had its flow, and the Commission was probably redundant.“

Surplus of Members on Commissions

In 2012, those commissions each had six members. They were appointed by the Board headed by then chair Selimović. When the new Board headed by Radeljaš took office, these were disbanded and the new ones with double the number of members were appointed. In the following three years, these commissions continued to work with different members who collected a combined amount of 334,100 KM.

Where only doctors were put on the commission for medical treatment abroad, lawyers and economists joined them. Almira Lujinović, a docent at the Sarajevo School of Medicine, who was newly appointed, told CIN that it was necessary for a commission to have a number of members.

“So that it does not look like everything was in the hands of two or three, now there were physicians of various professions. I don’t know if 10 was needed, but it was because three was insufficient,” said Lujinović.

Also, the members of the Commission for Deciding on the Rights from Mandatory Health Insurance in the Second Degree regularly received fees regardless of attendance. Even though the rulebook stipulates 10, the Commission had 12 members.

Almasa Jukić chaired the old Commission that was disbanded upon Radeljaš’s arrival. She spent just two months on the new commission. “I was very upset that I was relieved in this way, because it was not quality that was chosen…but the party,” said Jukić.

According to a rulebook adopted for the first time last year, Commission members are appointed for one year and can be relieved of duty before that time if they are not performing. The commissions must have rules of order, while all members must sign a declaration of non-existence of conflict of interest and a non-disclosure agreement. Meetings are supposed to take place at least once a month. The fees are paid by per session — 120 KM per the chair and 100 KM per members. The commission coordinator is not entitled to a fee, and neither are members who do not attend sessions.

Sarić was on the commission for two terms. He said that he joined at the suggestion of the Health Ministry and that the increase in its members made no sense. “You can even find the minutes in which I asked why so many people all of a sudden?“

Also, he said that a member not attending the sessions was regularly paid anyway. “I know that one commission member…I think Mirza Alispahić…was never present… even though he was appointed and regularly paid. We were regularly mentioning this in the reports that we submitted with the Board of Directors,” said Sarić.

Auditors have also established that one commission member was paid in absentia. According to the records collected by CIN, Alispahić received 10,500 KM in total. Alispahić did not return calls from CIN by the time of publishing of the story.

Sarić said that other members regularly attended meetings and that the Commission worked well and solved a number of cases. The commission members received a combined 127,400 KM in payments over 35 months.

The new Board increased the number of members in the Commission for Medicine as well. It doubled in size to 12 members, which is more than what its Rules have defined. According to the FBiH Law on Health Care, the Commission for Medicine issues and reviews the list of subsidized medicine and harmonizes it with the FBiH list and prices and decides on measures to curb inefficiency in medical spending.

In 2014, the Commission did not meet once, but its members still collected 44,400 KM. The Commission stopped work at the end of May 2015. The Board chaired by Selimović said in its decision that the Commission members would not be reimbursed for the last five months because they did no work under their purview. By then they had received a combined 79,300 KM.

Currently, three standing commission exist at the Bureau set up in accordance with Board decisions. Bureau employees appointed to commissions are not entitled to reimbursement while other members are paid by per session. The fees are between 100 and 120 KM as is stipulated by the Rulebook on the Appointment of the Bureau’s Commission Members adopted in 2016 for the first time.