Public Health Clinics in Trouble Because of Politics

If a calamity had hit East Sarajevo area this July, the local public health care clinic would have been hard-pressed to respond. Supplies including drip feeds were limited and staffers were unmotivated because their salaries were two months late.

Operational problems arose from the fact that local politicians of all persuasions from two municipalities could not agree for months on who to appoint as director of the East Sarajevo Clinic which they co-founded. The majority in the East New Sarajevo assembly is led by the Alliance of Independent Social-Democrats (SNSD), while the Serb Democratic Party (SDS) runs East Ilidža.

The stalemate was so severe that for a while each municipality had its own acting director, with neither authorized to sign off on payments. In mid-July the clinic’s frustrated staff organized a strike while providing medical services only to people in dire straits.

Soon after, the two municipalities came to agreement. Two managements instead of one were appointed. Zoran Krstović was appointed by the East Ilidža, while his co-director Danilo Kujačić was nominated by East New Sarajevo. This agreement came at the expense of the clinic’s budget which had to cover two managers instead of one.

Both were given equal powers and directed that all decisions had to be jointly agreed to.

Two Managers in One Health Clinic

The chairman of the East New Sarajevo Assembly Dejan Šantić said that selection of a manager had been easier in the past when the same party ruled both municipalities. The manager was voted in by the council members of one municipality and verified by those of the other, before the deal was formalized through a vacancy opening. The secretary of East New Sarajevo Assembly, Dragan Cvjetić, said the vacancy was a farce. The criteria for selecting the new manager were tailored to fit the background of the candidate already chosen. “Just short of publishing a picture,” he said.

In September 2011, a graduate social worker Dragan Krstović was appointed general manager. He belonged to Party of Democratic Progress’s (PDP) stable. After local elections in 2012, he became part of the governing coalition when he joined the East New Sarajevo Assembly as a counselor.

“I think that this councilor post did strengthen my position as manager. I think it would not be fair to say that it did not,” Krstović told the Center for Investigative Reporting in Sarajevo (CIN).

Insiders interviewed by CIN say that being a councilor helped Krstović remain the manager until May of this year, even though he should have retired in 2014. When his term expired in October 2015, a petition circulated to dismiss him. Nothing came of it. 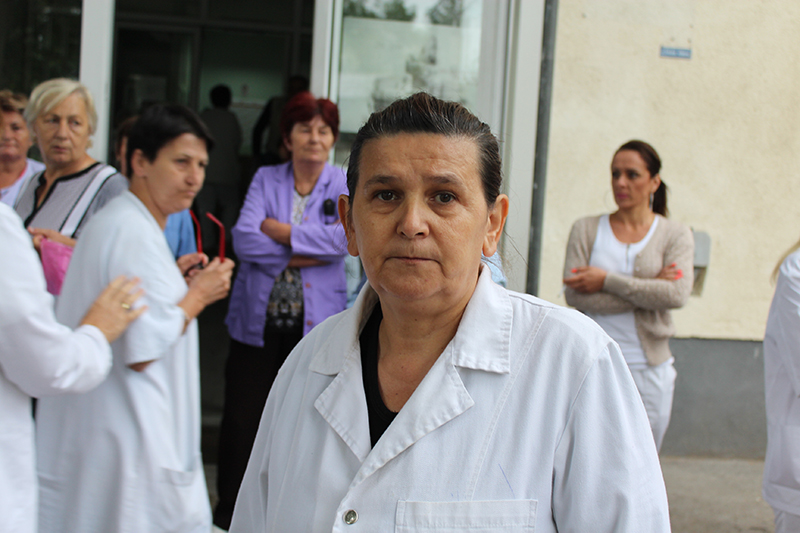 On the eve of a strike at the East Sarajevo public health clinic, nurse Borka Šućur said that they could offer patients only emergency services because of nearly exhausted supplies. (Photo: CIN)

Without waiting for a decision from East New Sarajevo councilors, their counterparts in East Ilidža withdrew support for Krstović’s reappointment. They appointed his cousin Zoran Krstović, a general practitioner at the clinic’s field branch, the new acting general manager.

East New Sarajevo did not approve this appointment. After negotiations broke down, it dismissed Dragan Krstović and appointed another Assembly Councilor Danilo Kujačić as its acting director. He is an agricultural engineer.

Šantić said that Kujačić was appointed because he was the only candidate the majority of councilors wanted to consider. He himself nominated Kujačić because during extensive debate, councilors could not come up with any other candidate.

The clinic operated with two acting managers for about a month and a half even though neither was formally registered with the court and, hence, could sign invoices to buy supplies or release salaries.

Patients say that they had to pay for medical supplies themselves. “Believe me, we just have five more drip feeds that we have to save for emergency cases only,” nurse Šućur told CIN shortly before the strike. During the one-day strike, the patients received only emergency services. 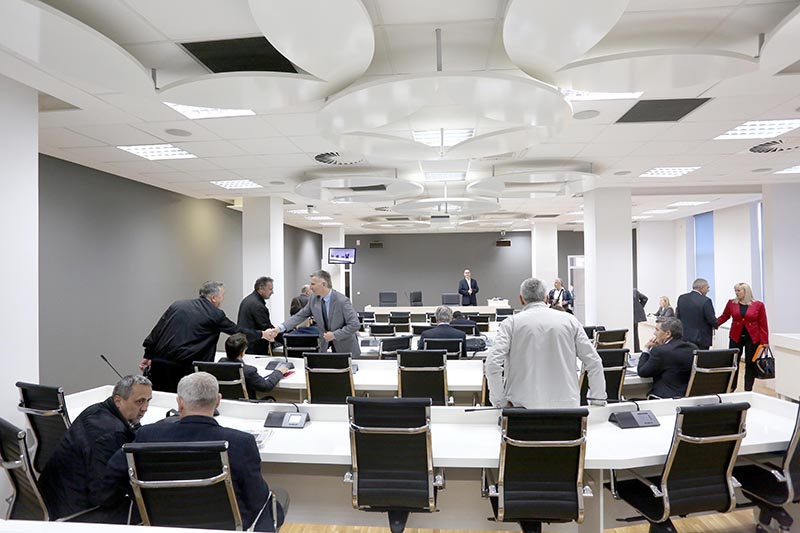 Soon after, a deal was reached to keep the politicians of both municipalities happy. The by-laws of the health care clinic were amended to introduce the post of a co-director into the clinic’s management structure. Krstović and Kujačić were appointed until September when a new management is to be selected for a four-year term. During the first term, the director will be selected by East Ilidža and co-director by East New Sarajevo and afterword, the nominees of two municipalities will swap places.

According to the Republika Srpska (RS) Law on Public Health, public health clinics are founded by municipalities and towns whose councilors appoint managers.

“Most often a political person is appointed, someone who is politically acceptable without any regards for professionalism and whether he’s capable – just so that the parties get their way formally,” said Milenko Granulić, the president of the RS Union of Health Care and Welfare.

He said that East Sarajevo clinic will have no use of an agricultural engineer. “God forbid an outbreak of epidemic or whatnot, what would he have to contribute? How could he organize a (emergency) response? He would have no clue. That’s silly.”

According to a CIN investigation, at least 30 current and former managers of health care clinics in the RS are political party members. At least nine have been directors and councilors at the same time, while 15 clinic’s directors will run at this year’s elections.

PThe chairman of the East New Sarajevo Municipal Assembly, Dejan Šantić (in the middle) nominated Danilo Kujačić for public health clinic’s manager as councilors could agree on no other proposal. (Photo: CIN)

One is Saša Jovičić. As a counselor with Srbac Municipal Council he cast a vote for his own appointment to the management of the local clinic. Jovičić is now out of politics, but still the director.

“You’re a counselor in the city council that appoints you the manager, reviews your financial books, endorses your plan of activities and end year report. That’s silly,” said Granulić.

East New Sarajevo council’s minutes show that councilors did not spend much time discussing a report on clinic activities when it was on the agenda during the time when Krstović, a fellow councilor, was the manager. Even though patients complained about services, the councilors only praised the work of the clinic’s manager. Rarely did anyone take up the issue of quality of services.

Manager in Charge of Vacancies

People CIN talked to say that the managerial position is very important for politicians because they decide about hiring. “How do you win the elections? By hiring for public companies and public institutions,” said the secretary of East New Sarajevo Assembly Dragan Cvijetić. Children of current employees and the families of local politicians work in some public health clinics.

Hiring is mainly in the hands of the clinics’ managers. Granulić said that vacancies are rarely put out, which is why there is no guarantee that public health clinics hire the best candidates for the job.

“We know how hiring is conducted in today’s BiH – mostly through family connections or for money. It’s an open secret,” says Granulić, adding that politicians don’t care about the quality of health services because “politicians only care about pork-barrel politics and fulfilling election promises. “

According to the RS Fund data, out of 54 health care clinics that it finances, 51 are overstaffed. More than 26.3 million KM was spent on excess staff. The most extreme examples are clinics in Trnovo and Novo Goražde that spend more than 65 percent of the Fund’s money on excess staff. Last year these two clinics spent nearly 300,000 KM combined in this way. 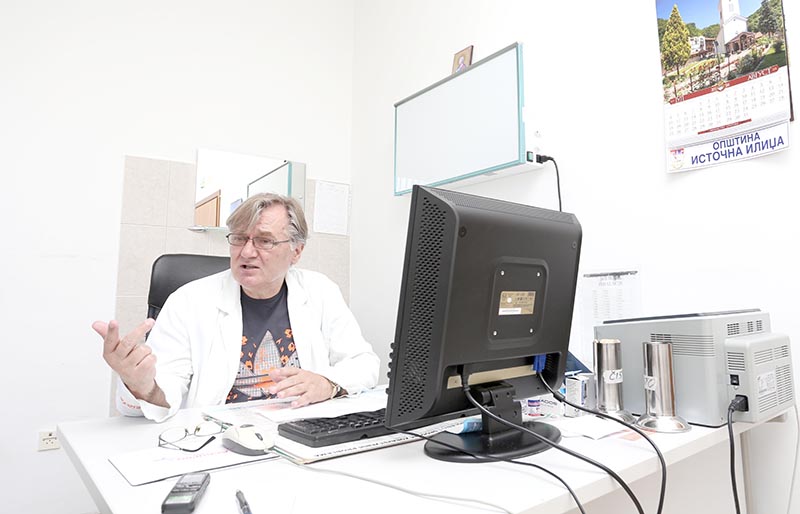 Fund representative Biljana Rodić-Obradović explained that the clinics could pay for taxes and workers’ benefits with saved money, if there was no excess staff. According to the RS Tax Administration records, 43 public health care clinics in the entity owe nearly 56 million KM in taxes.

Rodić-Obradović said that paying back taxes and benefits would feed back into the budgets of the clinics.

“If they paid that, this would be our revenue and from that revenue we would finance them.”

Due to excess staff, Zvornik clinic that serves around 50,000 patients is also in trouble. Out of a total of 4.5 million KM that it received last year from the Fund, it has spent more than third on surplus employees.  Dr. Goran Birčaković, who is also a union official, said that surplus staff had cost the RS Tax Authority more than 2.3 million KM in unpaid taxes.

Salaries are two months late and benefits are not regularly paid which is why strikes are frequent. Opposition parties in the local Assembly and employees chalk up excess hiring to Democratic Peoples’ Alliance (DNS) party officials who have had a stranglehold on the clinic for 10 years. Along with the Alliance of Independent Social Democrats and Party of Democratic Action, DNS is part of the ruling majority in the Zvornik Assembly that appoints the clinic’s manager. The current director Radivoje Aćimović is also a party member. He’s a former staffer of Zvornik municipality.

He told CIN that he was the only candidate when the vacancy was published. He thinks that being a party member helped.

“I guess it helped.” Despite the Fund’s figures about excess hiring, Aćimović says that the Zvornik clinic does not have staff surplus: “We have a Rulebook on Job Classification approved by the Ministry and everything is in line with the Rulebook.” 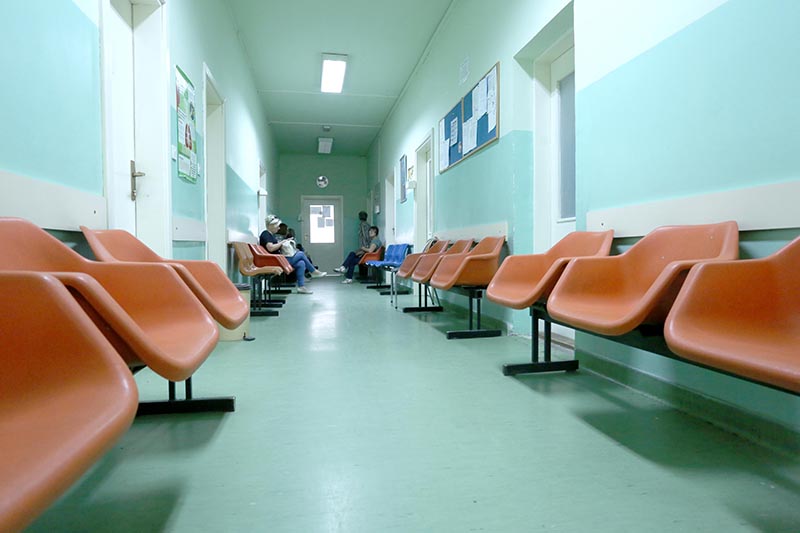 Birčaković says that the problems stem from the fact that one institution appoints management, while another finances the public health clinics: “The biggest issue with this financing, that is its losses, is the fact that the municipality appoints those functionaries, while the Fund and Ministry pay them,” said Birčaković.

“Whether you will spend what you have received in this or that way is up to the management of the health care providers,” said Rodić-Obradović adding that the Fund buys services which, a survey of patients concluded, could be delivered with more quality.

According to the Fund, the number of hires in public health clinics has fallen to a trickle lately. One explanation is that last year’s changes to the RS Law on Primary Health Care stipulated that staff surplus must be paid by the municipality, that is, the public health clinic’s founder.

“Whatever money is available, first of all, it is earmarked to finance health care, not to finance excess staffers,” said Rodić-Obradović.

Income, debts and expenses for excess staffers in the RS public health clinics.