Taxpayers Paid Dearly for Condo That Milica Marković Got for Free

Veteran legislator Milica Marković received a five-room apartment in Bijeljina that was paid with fuel oil from stockholding supplies. Even though the entity government was giving away flats to senior officials at the time, Marković did not follow the legal procedure. Another plan was hatched to serve her. 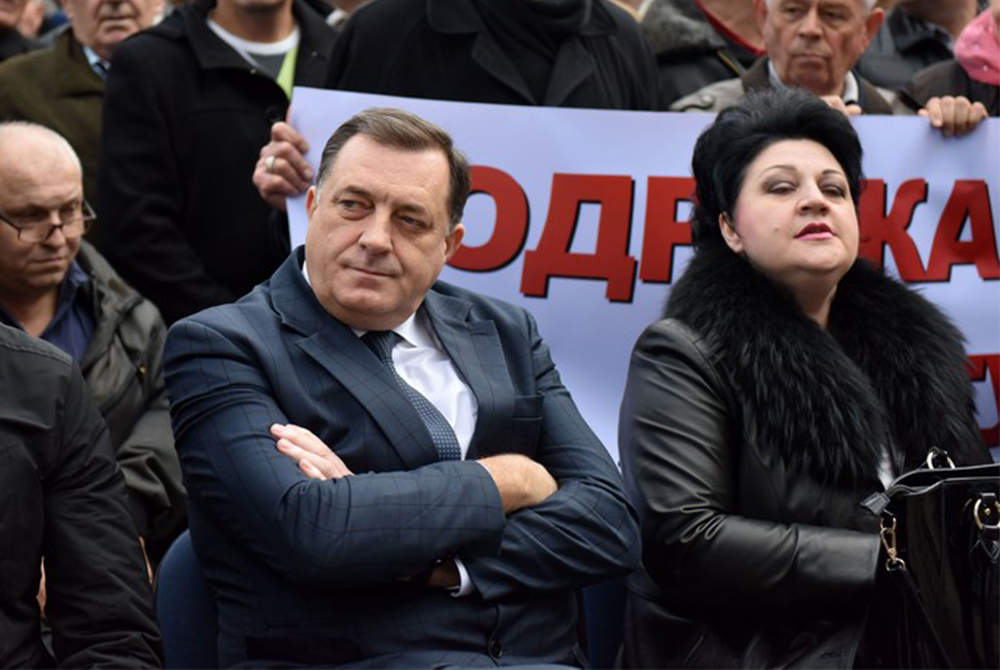 Milorad Dodik promised legislator Milica Marković to help her get a flat and referred her to Republika Srpska Stockholding Agency. He testified in court that he asked the agency’s director to get the job done in line with the law. (Photo: Info Bijeljina)

In mid-2000, Milica Marković, then a legislator with the Serb National Alliance in the Republika Srpska (RS) National Assembly, asked Prime Minister Milorad Dodik to have the RS government pay for her condo. At the time, she was taking care of two children and lived in someone else’s apartment that she was forced to leave.

In those days, the government helped many office holders who lived in “inadequate” condos or apartments they did not own. The usual procedure was for an office holder to apply to the Commission for Housing Affairs. Later, they could buy occupancy rights for condos from the government for a token amount.

Marković reasoned that she was entitled to a condo and that Dodik had promised to help her. Three months later, the RS Stockholding Agency in agreement with the state-owned corporation Drina paid a private construction firm Welting for a five-room apartment in Bijeljina. In 2001, the companies’ directors were charged with damaging the RS budget with the intention of buying a flat for Marković. Eleven years later they were acquitted because Marković was not formally the condo’s owner at the time and the budget was not damaged.

Reporters from the Center for Investigative Reporting (CIN) in Sarajevo uncovered that Marković got a deed to the condo in 2016. 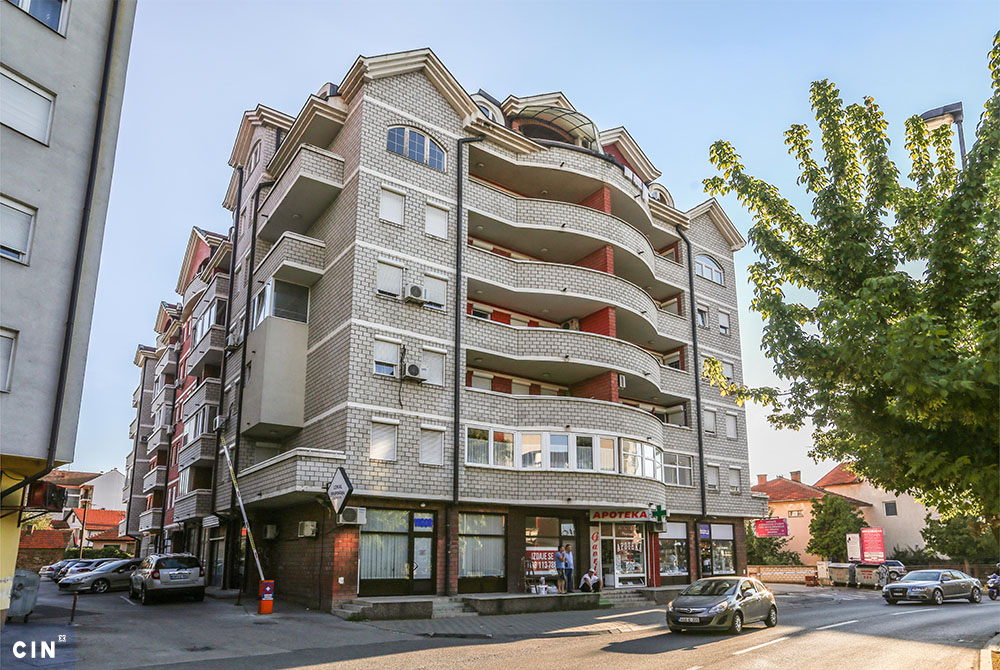 In this building, two apartments were merged into a five-room apartment for legislator Milica Marković. She has had a key to it for 10-odd years, but neighbors say that the apartment is vacant and that she has never lived in it. (Photo: CIN)

The condo was the subject of several litigations during 18 years. In those court cases, Marković claimed that she submitted a request for a condo to the Cabinet after talking with the prime minister.

“Then Prime Minister Milorad Dodik told me himself to look for a housing unit in Bijeljina and to sign a contract,” Marković told the police in 2001, adding, “The government was to pay the bill.”

Later in the court she stated that she signed the contract at the bidding of the head of the RS Stockholding Agency who told her the government had instructed him to see it through.

In her native town she found a private construction firm Welting that was going to build her future apartment. In a building it was putting up in downtown of Bijeljina, the firm merged two condos into one 120-meter place for Marković.

“I thought – if the government was going to buy me a condo, may it approve this one for me,” she told judges at the beginning of the trial.

Intending to get the condo as soon as possible, Marković invited her party colleague Dušan Ilić for a meeting in September 2000. He was the director of the state-owned Drina corporation. Ilić told the Bijeljina police that Marković asked him at the time what Drina could take from stockholding supplies. The brick factory used fuel oil to heat its furnaces so an agreement was easily reached.

“She mentioned then a round figure for the condo to the tune of 160,000 KM which corresponded to the amount of around 300 tons of fuel oil,” Ilić said.

Then, Marković signed a contract with the deputy head of Welting, Strahinja Vuković, which stated that she was going to pay for the condo. Both knew that this was not going to happen. 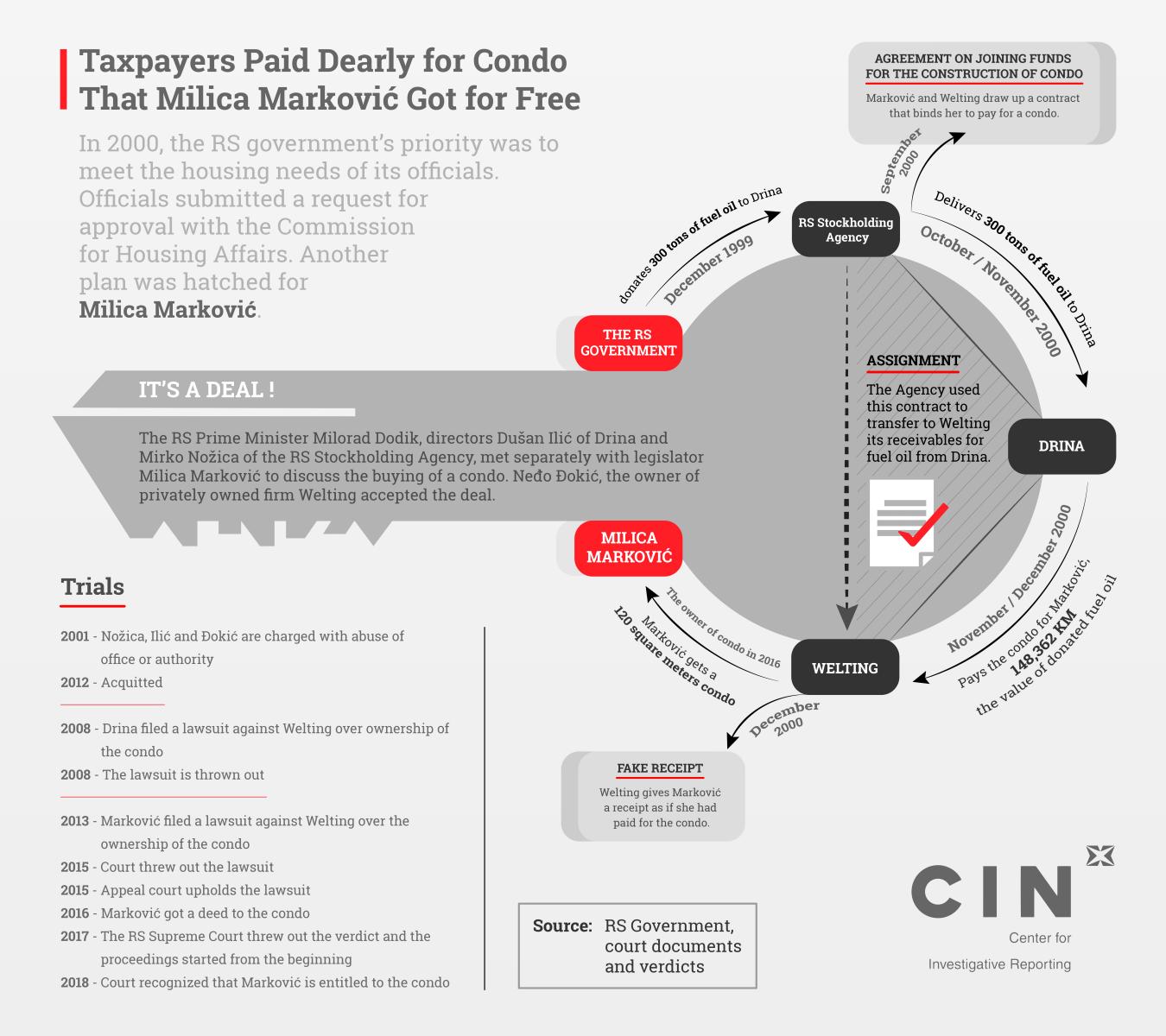 Things moved fast from then on. The agency gave Drina fuel oil which the RS government had paid nearly 150,000 KM. Even though this was a donation, invoices did not state so. Drina accounted for it as a purchase yet to be paid. Following an already established plan, Drina was supposed to wire the money to Welting’s accounts. However, the firm’s financial department refused to do this because it did not have a document justifying the payment. It suggested that Ilić solve this through assignment. Thus the agency assigned its receivables from Drina to Welting and Drina paid the value of fuel oil to Welting instead of to the agency.

In that way taxpayers came to pay twice for the same fuel oil. “The assignment contract served the purpose of implementing a resolution, some agreement… to buy a condo for Milica,“ Mirko Nožica, then head of the agency, told CIN. “We did as we were instructed by the one who had money.” He said that Dodik asked him to do this. Dodik refused to talk with CIN.

Several months earlier, the government also gave Nožica a flat which was paid for with 135,000 KM of taxpayer money.

Nine months before Marković and Ilić agreed that Drina should get the fuel oil from the agency, the RS government had ordered the agency to supply fuel oil for its 53 spending units (organizations paid from the budget). Drina was the last company on the list. Ilić told CIN that neither he nor his predecessor asked for a donation in fuel oil: “That decision about a donation seems to be added after the fact, as if the intention was to break my neck.”

However, agency director Nožica said that all companies were informed about the donations of fuel oil at the same time.

Drina promptly wired money to Welting which provided Marković with a fake receipt in December 2000, as if she had paid for the condo.

Construction of the building where the condo is located was only completed at the end of next year. 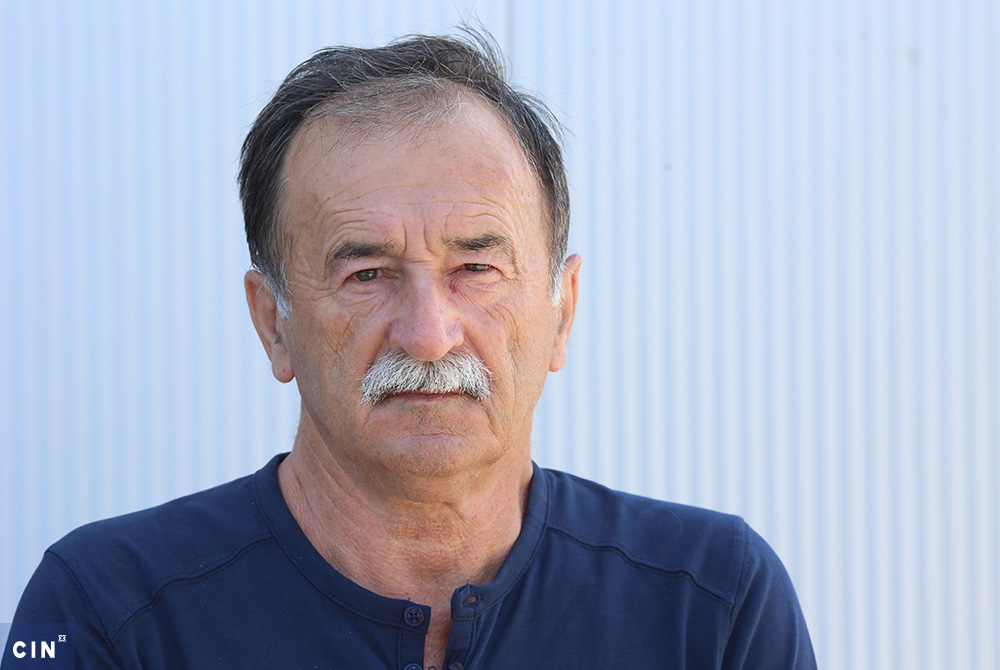 The former manager of the Drine corporation, Dušan Ilić, told Bijeljina police that legislator Milica Marković asked him what he could request from the stockholding agency. “She mentioned then a round figure for the condo to the tune of 160,000 KM which corresponded to the amount of around 300 tons of fuel oil.“ (Photo: CIN)

In January 2001, the RS government changed. Dodik’s cabinet was succeeded by the Cabinet of Mladen Ivanić. Marković’s party weakened in the Assembly and she left to become a member of Dodik’s Alliance of Independent Social Democrats – the new opposition.

Soon after the change of power, the Basic Public Prosecutor’s Office from Banja Luka filed an indictment against Nožica, Ilić and Welting’s owner and director Neđo Đokić. They were charged with the abuse of office or authority with the intention of providing Marković with a condo. The trial went on for 11 years.

Dodik testified that fuel oil was not a donation, even though he had personally signed the decision for delivery of oil paid for from the budget. An expert witness hired by the court established that Drina was damaged by paying for the donation.

A panel of judges, however, concluded that the corporation suffered no damage for paying fuel oil to Welting instead to the entity agency.

They also ruled that the RS budget had not been damaged because the government got an apartment worth the market price it had paid. The RS government has never claimed a deed as the owner of the apartment. Instead, it remained in Welting’s ownership until 2016. Finally, Nožica, Ilić and Đokić were acquitted.

While this trial went on in Banja Luka, now privatized Drina in 2008 sought to obtain ownership from Welting of the five-room condo before the Basic Court in Bijeljina. The court threw out the lawsuit saying Drina had no document upon which to base an ownership claim. Instead of any bill of sale, it only had the assignment agreement, evidence of the payment of fuel oil to the agency.

Thus, not the government, the agency or Drina could be owners of the condo because a bill of sale did not exist. The former director Nožica is now aware of the omission. “Should we have made the bill of sale? Probably yes. Just to be clear and fair, the flat belongs to the government until it gives it to someone.”

However, there was no formal procedure to give it to anyone. In 2009, Marković received the key from lawyer Predrag Ješurić. He got it from his friend Dušan Lazarević, the owner of the LD firm which was a co-investor in the construction. At the time, Lazarević was a Drina owner.

Over all these years, no one from the government or Welting asked her to give the keys back. 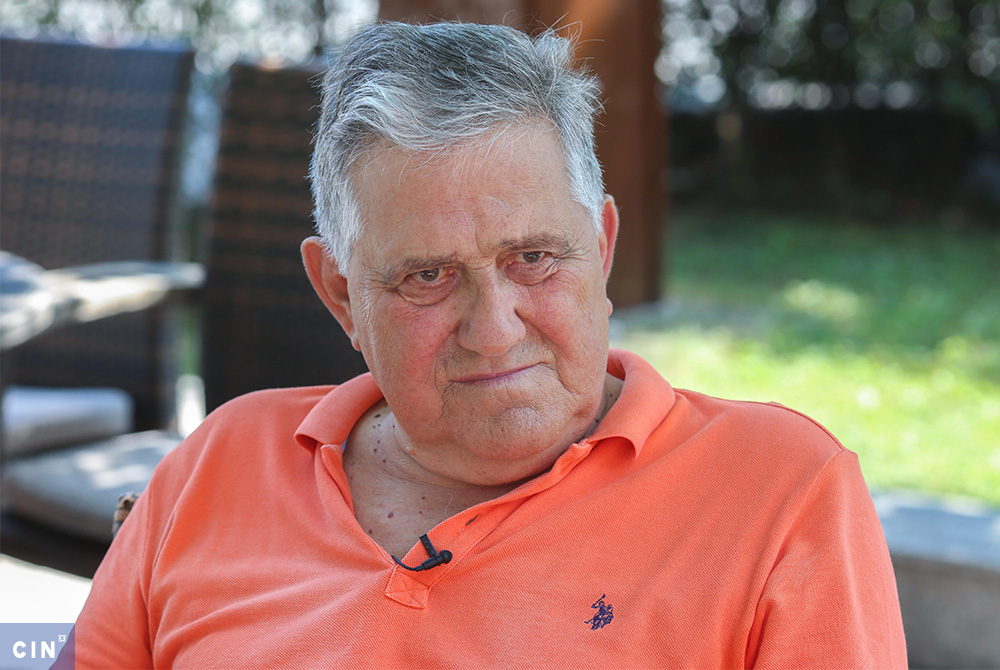 The former director of Republika Srpska Stockholding Agency, Mirko Nožica, said that he never played a key role in the deal, unlike legislator Milica Marković. “I only did what the government ordered,” he said. “I implemented the decision and she asked for a receipt that she had paid for the apartment.” (Photo: CIN)

Meanwhile, her political career has flourished. For the past 12 years, she has been a legislator with the state parliament. She received a monthly salary of around 6,000 marks and in 2011 she bought another five-room apartment in downtown Bijeljina. Nevertheless, she asked Welting to transfer the title to her for the condo bought with taxpayer money. She sued Welting before the Basic Court in Bijeljina in 2013.

The court threw out her lawsuit. During the trial, representatives from the RS government stated that the legislator had no proof that the condo was paid for her, contradicting Dodik’s earlier statement that he ordered that the flat be paid with fuel oil on behalf of Marković.

In 2015, the District Court in Bijeljina overturned that decision and ruled that Marković had a right to the condo.

The verdict stated that there was a clear intention from the RS institutions to buy a condo for Marković. The court based that on witness testimonies who confirmed that the assignment contract was used to pay for Marković’s flat, even though it does not state this.

Due to the verdict, Marković managed to claim deed of the condo.

In 2017, the RS Supreme Court threw out the verdict and the fight over the ownership of the condo started again from the beginning. From then until now, the moves from the first trial were rehashed: the Basic Court refused Marković’s petition and she appealed. Finally, in November 2018, the District Court in Bijeljina ruled that Marković had ownership rights over the condo.

The court established that the agency fulfilled the obligations of payment for condo on behalf of Marković. The court did not consider whether the RS government acted in a legal manner when it was meeting the housing needs of Marković.

“According to the court documents, there is no legal single act about it,” stated the ruling of District Court in Bijeljina.

Before the last ruling, the RS government and Welting had a chance to request that she be erased from the land records and moved out, but they did not do it.

Welting’s lawyer Miodrag Stojanović responded that the owner Neđo Đokić has no interest in it because he got the money for the flat. “If the government does not care about the flat, the government of Republika Srpska, why would Neđo care?“

Deputy RS attorney general, Milan Radujko, representing the government in this trial, did not want to speak to CIN.

Marković did not want to explain to a CIN reporter why the RS government was contesting her right over the flat: “That’s none of your business,” she said. “You are not competent for me to tell you about it.“ 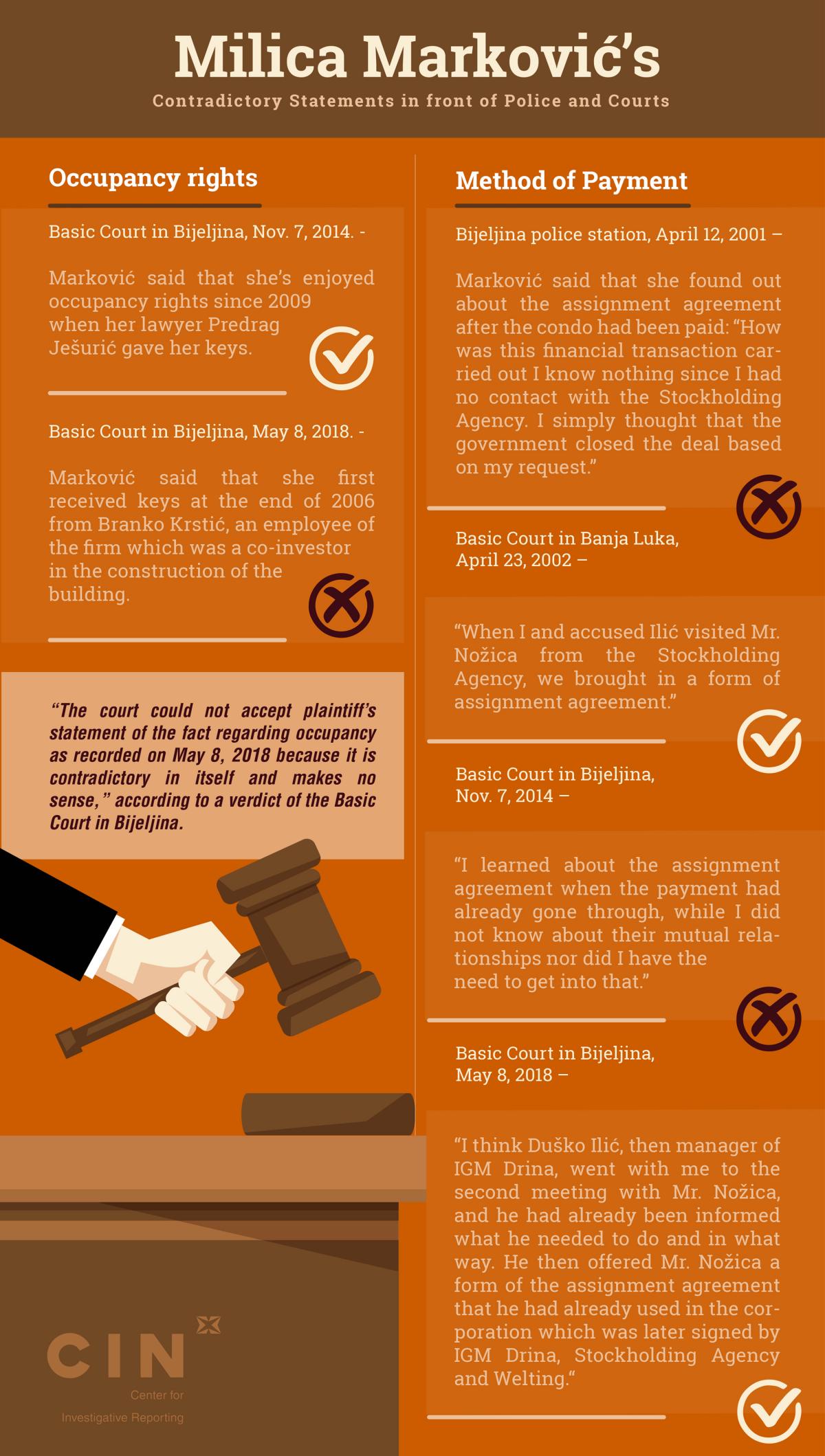