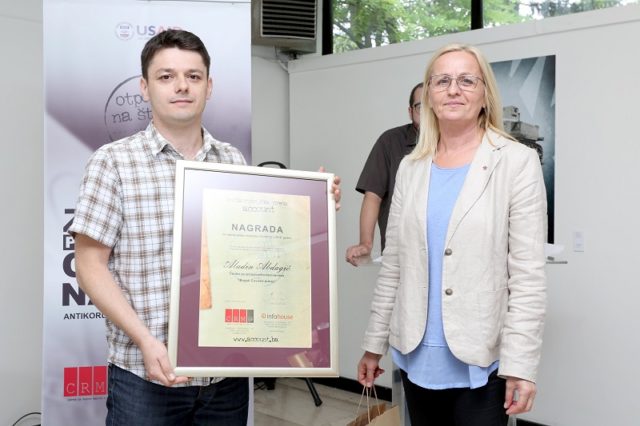 Aladin Abdagić, the editor-in-chief of the Center for Investigative Reporting in Sarajevo (CIN), won honors for the best corruption reporting in 2015 from the Anti-Corruption Network in Bosnia and Herzegovina (ACCOUNT) in Sarajevo today.

The ACCOUNT gave out its fourth annual award to the story about the property holdings of the BiH Presidency member Dragan Čović.

Abdagić exposed how the leader of Croatian Democratic Union of Bosnia and Herzegovina (HDZ BiH) and his wife Bernadica bought, or received as a gift, most of their property by 2003. After several investigations against Čović went underway, his wife continued to buy on behalf of the family, while some properties she received as a gift.

Last month, the CIN’s editor received the European Union’s second award for investigative reporting in BiH for the same story.

The award for the best video program went to FTV journalist Omer Hasanović for a story about hiring in Tuzla airport.