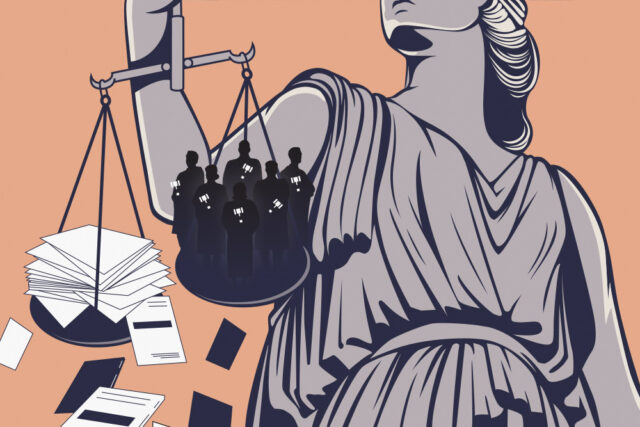 Dragan Uletilović, a judge of the Banja Luka Basic Court, has been sanctioned for a disciplinary offense of unjustified delays in making court decisions in June last year. His punishment was the pay cut for two months, amounting to about BAM 500. Three months later, he was promoted to a judge of the Banja Luka District Court, a position that comes with a higher salary.

In addition to Uletilović, at least 13 other judges and prosecutors have been promoted or had their mandates renewed despite the disciplinary offenses they made in their previous positions: misrepresenting work results, causing a case to be time-barred, misconduct, or disclosing confidential information from cases. Ten of them had their offenses established in a disciplinary proceeding before the appointment, while for the rest, the offenses were established after their appointments.

The appointment was made by the High Judicial and Prosecutorial Council of Bosnia and Herzegovina (HJPC BiH), which in its decisions claimed to have taken into account the candidate’s attitude towards work, their work results, and their conduct. However, CIN investigation shows that it is precisely these things that they have been disciplinary sanctioned for.

As there are no clearly defined rules on whether a disciplinary offense should be taken into account when appointing judicial officeholders, each case is considered separately. Željka Radović, a member of the HJPC, says that this is not a principled approach and that the practice should be standardized. “Please don’t [do it] selectively – when you feel like it –  so in one case we will ask and insist, and [in the next] five appointments no one will even mention it.”

In May 2016, the Banja Luka District Public Prosecutor’s Office filed an indictment against a civil servant for satisfying lust in front of other persons to the Banja Luka Basic Court for confirmation. The case was assigned to judge Dragan Uletilović, who took almost two years to issue a decision rejecting the indictment.

In the PO’s view, Uletilović’s decision was unlawful, hence they initiated disciplinary proceedings against him. In the course of the proceedings, this judge was found to have been unjustifiably late with rendering decisions in at least two other cases.

The judge admitted the mistake, asserting that it was due to overload. He was fined a ten percent pay cut for July and August 2020 – about BAM 500.

He was soon compensated for the loss. Already in September, he was promoted to the District Court of Banja Luka, where his salary is by about BAM 600 higher.

At the session of the HJPC during his selection, the head of the Department for Appointments, Jasmin Čalija, said that they were looking for a criminal law judge and preferably a Serb, so Dragan Uletilović was proposed.  The proposal was put to a vote and the appointment decision received the necessary support. In the reasoning of the decision, it was stated that criteria such as hard work were considered.

Judge Uletilović did not want to talk to CIN reporters, and HJPC member Selim Karamehić claims that the members of the commission had information about the disciplinary proceedings.

“We found that it was a disciplinary offense, but not of such a scope and gravity to stand in the way of his promotion”, said Karamehić. They have been informed by the Court that he is a good judge, with good work performance, regardless of the disciplinary proceedings.

A similar situation happened at the session of the HJPC in January 2021, when Sead Kreštalica was appointed a Deputy Chief Prosecutor of the Sarajevo Canton Prosecutor’s Office. On this occasion, at least two members of the HJPC asked whether the requirements regarding the ethnic balance in the institution had been met, and no one mentioned his disciplinary sanction. During the promotion, it was said that, among other things, his professional conduct, behavior outside of work, and professional impartiality were taken into account.

Kreštalica was disciplinary sanctioned in 2012 for discussing the court proceedings with the parents of Mirza Hatić from Sarajevo after the verdict for violent behavior was rendered. Kreštalica talked to Hatić’s father, Nijaz, in a cafe, and subsequently to his mother Dragana over the phone saying: “We sorted out that thing, and now there’s just one more thing.” Nijaz then took the phone from the prosecutor and told his wife that it was his friend, Kreštalica Sejo, who just spoke to her.  “He is really the best, best ever  (…) everyone is afraid of him. Yesterday, he got him off two offenses”, says the disciplinary decision against prosecutor Kreštalica.

As a result, he lost his position as a prosecutor in the FBiH Prosecutor’s Office in June 2012, although the appointment decision was made almost a year earlier at an HJPC session.

Kreštalica told CIN that, before his appointment to the position of deputy chief prosecutor, he had applied for a dozen vacancies, but was only once asked about the disciplinary sanction. In his view, there should be a set period after the disciplinary action that should affect the promotion, adding that he would not have applied for other positions during such a period.

“I’ll draw a parallel with a football player receiving a red or yellow card, which puts him out of the game. If Džeko receives a red card and does not play, should he be excluded from football? “Being punished once does not mean that he’s incorrigible,” says Kreštalica.

HJPC member Selim Karamehić says that disciplinary proceedings are assessed on a case-by-case basis: “…Then the circumstances when the offense was committed, the type of the offense and so on will be assessed.”

The judge of the Basic Court in Prijedor, Drena Marin, is needlessly worrying that she, as a candidate for the position of a district court judge in Prijedor, may suffer damage due to an anonymous disciplinary report.  She was promoted in May 2017, and the disciplinary proceedings was conducted a year later.

Candidates for the judicial position take a written test, i.e., a qualifying test with questions relating to the justice system. If the candidates are already performing a judicial function, they have an interview with a commission composed of HJPC members. After that, the HJPC Nomination Sub-Council makes a shortlist of successful candidates and the final selection decision is made by the HJPC.

The proceedings was initiated because Marin, as a Basic Court judge, appointed her sister Sanda Zubanović an ex officio defense lawyer in at least eight cases, thus earning her a little more than BAM 4,000.

At the disciplinary proceedings, Marin said that she took very hard the anonymous report and the complaint during the competition procedure. She claimed to have come to an interview for the job of a district court judge in Prijedor “as if someone had put a knife under her throat and the only thing on her mind was that the Commission will be asking her about the anonymous report.”

However, no one asked her about it during the interview, she confirmed to CIN reporters.

Although during the disciplinary proceedings Marin argued that there was no conflict of interest because she did not meet with her sister in the courtroom, the disciplinary commission rejected her explanation and fined her a 20 percent pay cut for three months – about BAM 1,900.

Judge Marin did not wait for salary deductions but paid the fine at once. She told reporters that the disciplinary action affected her, but not her career. “Because, indeed, I had all the best performance, exceeding the quota, and I exceptionally performed my judicial duty – so, in that sense, it did not affect me. I still perform these tasks prudently and responsibly.”

However, following this case, in December 2018, another disciplinary procedure was launched finding Marin responsible for another omission in the previous position. This time, it was about a case of deception to obtain a loan, which was time-barred due to her failure to act.  In this case, she’s got a public reprimand.

“It is only those who do nothing that make no mistakes, isn’t it?, commented judge Marin, explaining that judges may have a caseload of thousands of cases, and it is normal for omissions in work to occur.

Jasminka Knežević, an expert associate of the Municipal Court in Orašje, also dealt with a large number of cases in her way. She worked in this position for five years until December 2015, when she was appointed Prosecutor of the Sarajevo Canton Prosecutor’s Office, based on her performance, among other things.

However, after the appointment, in two disciplinary proceedings – in 2017 and 2018 – it was revealed that Knežević misrepresented hundreds of cases as completed, even though that was not the case.

As an expert associate, she declared 782 enforcement cases completed, although they did not qualify to be declared as such. In the disciplinary procedure, she repented and admitted responsibility, promising to never make such an omission again.

Yet, it happened again. In the second case, now as a prosecutor, she declared 30 cases completed. One-third of the cases were closed without a single prosecutor’s action taking place, while in the remaining cases she took actions subsequently.

She made the same promise again. “Let me express my sincere and deep remorse and promise that this will never happen again,” she told the disciplinary commission.

“It cost me a lot,” said prosecutor Knežević.

She claims her quota for the period of her work in Orašje Municipal Court had been corrected because of the sanction, but regardless of that, she already had an excellent performance because she works a lot. Knežević deems that disciplinary proceedings should be taken into account when appointing judicial officeholders, “but not for an indefinite period, because, look, even the most serious crimes get time-barred. To have murders time-barred, but disciplinary offenses with an infinite effect – that’s not right.”